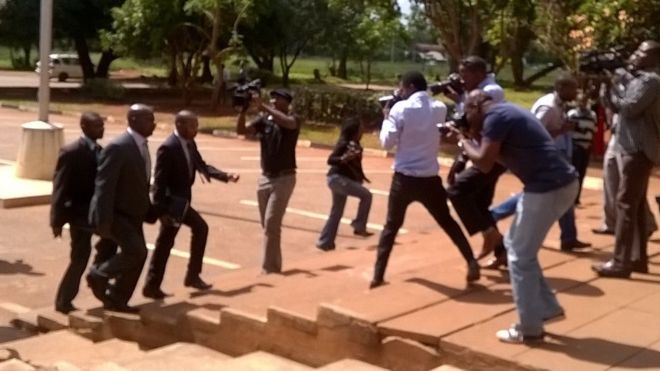 Zimbabwe’s chief prosecutor has been charged with obstructing the course of justice after allegedly dropping charges against people accused of plotting to bomb the president’s dairy.

Four army officers also appeared at the magistrates court in the capital Harare charged with treason.
Attorney General Johannes Tomana denies the charges. He was brought to court in the back of a police pick-up truck.
The milk production plant is run by President Robert Mugabe’s wife, Grace.
The prosecutor told the court that the four army officers were allegedly caught with firearms and sought to get bombs designed to blow up the dairy, reports the BBC’s Brian Hungwe from the capital, Harare.
Our correspondent adds that the court was told the four had formed a political party called Zimbabwe People Front and had set up a military training camp.
Mr Tomana is accused of dropping charges against two of the four army officers.

Mr Mugabe has been in power since 1980.
The ruling Zanu-PF party has been hit by factionalism as rivals disagree on who will succeed 91-year-old Mr Mugabe.
One faction of the ruling party is backing Grace Mugabe to take over from her husband while another camp is backing Deputy President Emmerson Mnangagwa.