Who Are You Voting For In The George Groves VS Chris Eubank Jr Fight? 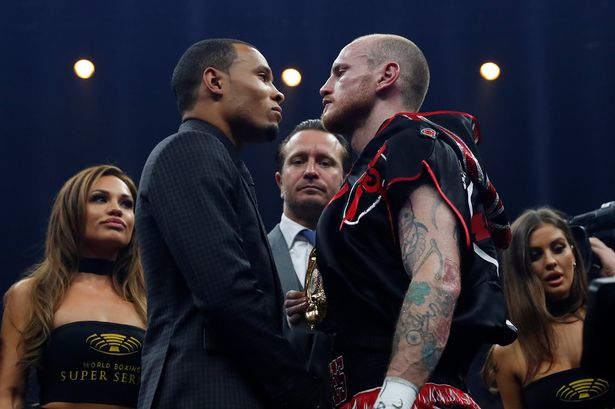 Groves, 29, set up the bout by stopping fellow Briton Jamie Cox in the fourth round at Wembley Arena on Saturday.
He will face Eubank Jr in January or February next year.
“He’s improved but hasn’t boxed anyone on my level,” said Groves.
“If I box like I did (against Cox), he doesn’t stand a chance. I boxed tremendously.”

It will be the first time Groves and Eubank Jr have met inside the ring.
Eubank Jr, who was ringside for Saturday’s fight, beat previously-undefeated Turkish boxer Avni Yildirim in Stuttgart last weekend.
The 28-year-old’s victory took his record to 26 wins from 27 fights, with his only defeat in professional boxing coming against Billy Joe Saunders in November 2014.
Groves, meanwhile, has 27 wins and three losses from 30 fights.
“Eubank is a performer first, a fighter second,” added Groves. “He’s always aware of how he’s being perceived. He will relish the big occasion; he was desperate to fight me because he knows it’s a big fight.
“That pressure isn’t easy to carry; it’ll be great, fun, but not unique to me.”
The venue for the fight is yet to be decided, although Chelsea fan Groves is hopeful it will take place at Stamford Bridge.
Source: http://www.bbc.co.uk/sport/boxing/41626409