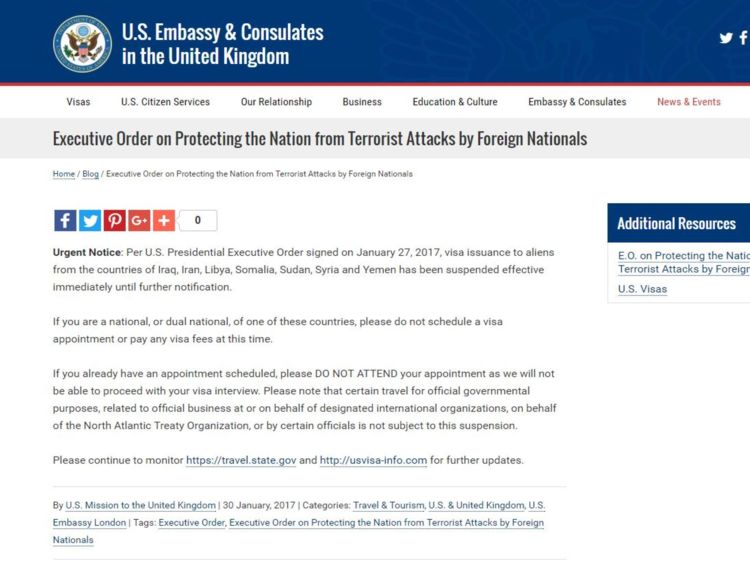 Boris Johnson is under pressure to clarify whether dual-nationality Britons can travel to the US during Donald Trump’s travel ban.

The Foreign Secretary has insisted that Britons with dual citizenship would still be free to travel to the US – even if they were born in one of seven majority Muslim countries on Mr Trump’s blacklist.
Mr Johnson’s clarification followed urgent talks with the US President’s senior adviser and son-in-law Jared Kushner on Sunday to discuss the position of Britons, such as Olympian Sir Mo Farah.
However, advice on the US embassy in the UK website on Monday morning said there would be a 90-day travel ban to the US for those from the seven countries: Iran, Iraq, Libya, Somalia, Sudan, Syria and Yemen.
And the notice said this included those with dual nationality.
It warned: “If you are a national, or dual national, of one of these countries (the seven majority Muslim countries), please do not schedule a visa appointment or pay any visa fees at this time.
“If you already have an appointment scheduled, please DO NOT ATTEND your appointment as we will not be able to proceed with your visa interview.”
The Prime Minister’s spokesman said he had not seen the statement on the website.
Former Labour leader Ed Miliband and Conservative MP Nadhim Zahawi, who was born in Iraq, have joined forces to call for an emergency debate in Parliament on the travel ban.
It comes as more than one million people signed an online petitioncalling for Mr Trump’s upcoming state visit to the UK to be blocked.
But Downing Street has insisted Mr Trump’s state visit will go ahead.
Her spokesman said Mrs May was “very happy” to extend the invitation to Mr Trump and added “we look forward to hosting the President later this year”.
Protests over the travel ban have also been planned in the UK for Monday evening. They are scheduled for 6pm in London, Manchester, Bristol, Brighton, Liverpool, Glasgow, Edinburgh, Cardiff and Swansea.
Labour leader Jeremy Corbyn said the ban was “outrageous, illegal and immoral” and that “we should stand up for the values that we believe in”.
He said he would be at the protests if he can but would definitely be sending a member of his team to the London protest.
Welsh First Minister Carwyn Jones has spelled out his opposition to a state visit by Mr Trump with the Prime Minister during talks in Cardiff.
A spokesman for the Welsh Government said: “The First Minister raised serious concerns about how the recent US immigration order was handled by the UK Government, and his belief that a state visit would be difficult in the current circumstance.”
Source: http://news.sky.com/story/protests-planned-in-uk-as-opposition-mounts-over-trump-travel-ban-10748052
#WeGotYourBack #WeGotItcovered #BreakingNews #Politics #USA #UK #DonaldTrump #BorisJohnson #USTravelBan
***WE GOT IT COVERED***
MICSTAGESUK