UNICEF Study Shows That UK Is Failing To Improve The Well-Being Of Children From Poor Backgrounds. 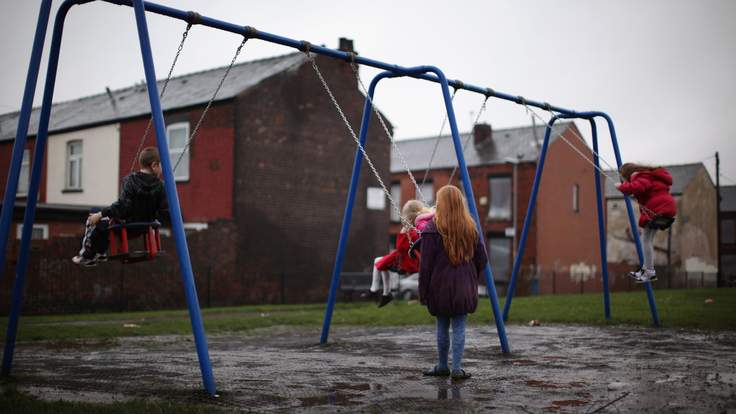 The UK is failing to improve the well-being of children from poor backgrounds, according to a damning study by UNICEF.

When it comes to healthy eating, the gap between rich and poor is so big that Britain came last.
The UK was also near the bottom on physical activity, while in education the UK ranked 25th out of 37 countries.
British children from disadvantaged backgrounds are now lagging behind Slovenia, Poland and Romania for their ability in reading, maths and science.
UNICEF UK’s Lily Caprani said: “We must be more ambitious for our children. Britain can and must do better.
“What really stands out for the UK is that children who are at the very bottom of the income distribution, so those with the most disadvantages, are doing particularly badly when it come to things like healthy eating, because we are really slipping behind other nations.
“Income inequality is very, very big and growing.
“For those children in the most disadvantaged households, if it wasn’t for things like tax credits to protect their incomes, we’d actually see the biggest levels of inequality in the entire industrialised world.”
Paul Gilling is a PE teacher at a primary school in Newham, East London, where a quarter of children receive free school meals.
He said the challenges there were typical of many poorer communities in the UK.
“The diet of the children is quite poor – high sugar foods, high fat foods, are easy to buy. The children come to PE overweight, or with high BMI index.
“Parents are worried about letting their children out to play by themselves, they are worried about stranger danger. Or they can’t participate in sport because they need to go and do religious studies after school, or their parents are working.”
Children’s groups said the Government needed to do more to address inequality for poor pupils in the UK.
Matthew Reed, chief executive of The Children’s Society, said: “It’s time we renewed the fight against child poverty in Britain and the Government could make a good start by abandoning its planned four-year benefits freeze, which will make life harder for millions of children.”
The Government said its policies were helping to lift children out of poverty.
A spokesman said: “We’re working to eliminate child poverty and improving life chances for children and there are now 300,000 fewer children in poverty.
“We know there’s more we can do and that’s why we’ve introduced the National Living Wage, which is increasing the incomes of the lowest paid.
“All infant pupils can now get free school meals – meaning 1.3 million more children get a nutritious free meal at lunchtime, saving families hundreds of pounds.”
Source: http://news.sky.com/story/1678269/un-study-finds-uk-is-failing-poorer-children