Uber monitoring drivers in US in attempt to flag dangerous driving 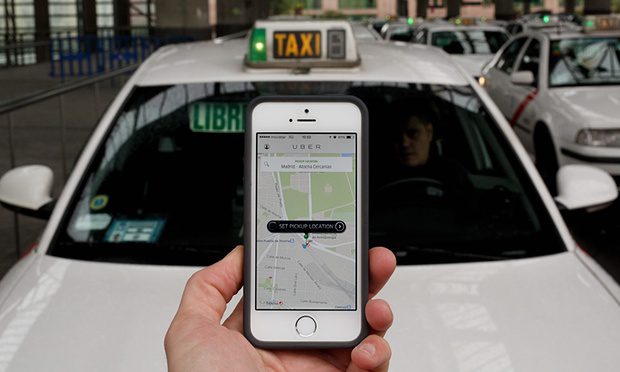 While monitoring drivers more closely could boost safety, interviews with current and former drivers suggested the effort could be a mixed blessing
Uber has quietly begun monitoring the movements of some of its drivers in an experimental Texas-based pilot that is attempting to flag up dangerous driving.
Abrupt movements in a smartphone’s accelerometer, a movement sensor built into most smartphones, can show when a driver accelerates and brakes too quickly – consistent with driving too close to the car in front, or ‘tailgating’.
Uber did not explicitly tell drivers that their movements are being tracked, but the company says it is informing users only when it needs to access the data after a company complaint. Selected drivers in Houston have been monitored for the trial since it started in late 2015.
Uber told the Guardian it is running or is planning several experiments designed to gain more influence over the behaviour of drivers and passengers in its vehicles, which are owned and operated by freelance contractors. Taken together, these efforts could amount to a subtle form of quality control.
The company says it is considering sending dashboard phone mounts to drivers accused of texting while driving, and installed passenger-facing mirrors in the backseats of operators in Seattle based on evidence it causes riders to “self-moderate” their behavior. It has also put a children’s sound toy called a Bop It in the back of cars across Charlotte, North Carolina, to dissuade intoxicated passengers from distracting drivers.
The Uber app offers rides on demand using a network of unregulated drivers. It has spread to 300 cities globally and is one of Silicon Valley’s most powerful firms, with backers including investment firms Google Ventures, Greylock and Benchmark. Uber’s app has been downloaded millions of times and it claims to have served up more than 1bn rides.
Founded in 2009, the company has become the platonic ideal of a successful tech startup and has replaced the taxi cab for many consumers. Its last-known private valuation of $62.5bn is more than the market capitalization of both Ford and General Motors.
But for all its success, one major stress point for the company has been its reliance on human drivers because, unlike computers, they are unpredictable and hard to monitor.
The company seeks to get around this problem with its autonomous vehicle lab in Pittsburgh, Pennsylvania, staffed by former roboticists for Carnegie Mellon University. At an industry conference in October, Uber chief executive Travis Kalanick said it could be “five, 10, even 15 years” before there are autonomous vehicles that are completely safe.
The recent behaviour experiments are a stop-gap until then, said , a former Facebook executive. “A world of exclusively autonomous vehicles is not happening overnight,” Sullivan told the Guardian. “There’s a lot we can do to make roads safer before that happens.”
Sullivan recalled an Uber ride he took shortly after joining the company in which the driver recklessly zoomed down US 101, the main highway that connects San Francisco and Silicon Valley.
Read on: http://www.theguardian.com/technology/2016/jan/26/uber-monitoring-drivers-us-passenger-safety-houston