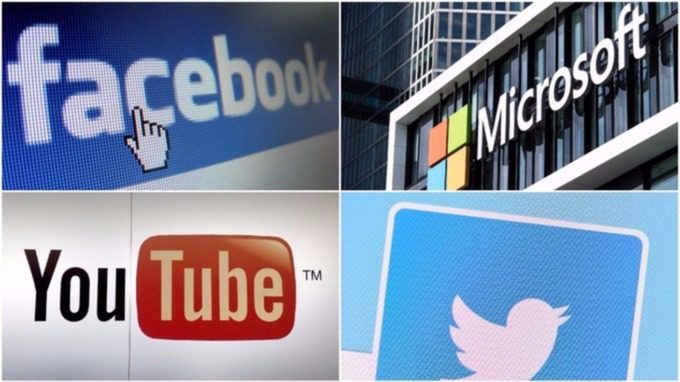 Tech giants like Google, Facebook and Twitter must find ways to remove terror propaganda within two hours of being posted online – or face fines, Theresa May will demand.

The prime minister will help lead an international call for the internet firms to be set a deadline of a month to show they can develop the necessary technology fixes.
The move comes as YouTube faced criticism for failing to take down extremist contentthat included videos praising Hitler and the Taliban.
And days after a report found more jihadist propaganda is viewed online in the UK than any other country in Europe.

Leaders at the United Nations General Assembly in New York will warn they are ready to take legislative action, which could include fines, for failing to act in the face of a growing problem.
The so-called Islamic State generated 27,000 extremist postings on platforms like Twitter in a five-month period between January and May this year.

27,000
The number of extremist postings on social media made by IS in the first five months of 2017.
The links ranged from bomb-making instructions to calls to commit atrocities with cars and knives, with the majority of shares taking place in the first two hours.
In a keynote address at the UN, Mrs May will call on the tech giants to go “further and faster” to fight the growing spread of extremism – while hailing the public response to terror.
“When terrorists struck London and Manchester this year, the world saw our cities come together in defiance,” she will say.

“Our Parliament carries on. Ariana Grande came back to Manchester and sang again. London Bridge is bustling with people. Our communities came together at the mosque in north London. And Londoners got back on the Tube.
“The terrorists did not win, for we will never let anyone destroy our way of life.
“But defiance alone is not enough. In the last decade hundreds of thousands have been killed by terrorists across the world. This is a truly global tragedy that is increasingly touching the lives of us all.”
Mrs May will say web giants must block access to ideologies which “preach hatred, sow division and undermine our common humanity”.
She will also host an event with tech giants including Microsoft, Facebook and Twitter on the fringe of the General Assembly, alongside French President Emmanuel Macron and Italian PM Paolo Gentiloni.
Major advertisers, who are ramping up pressure on the firms to stop adverts being screened alongside unacceptable material, will also take part.
Mrs May has previously accused the web firms of giving terrorist ideology “the safe space it needs to breed”.
But she will use her speech to hail their progress since the creation of an industry forum to counter terrorism in June.
What commitments to fighting terror have tech companies made so far?

Mrs May’s address comes as Google pledged £1 million to help fund projects to fight online and offline extremism.
Grants of between £2,000 and £200,000 will be handed out to both technological and grassroots projects in partnership with the Institute for Strategic Dialogue (ISD).
The month deadline on internet firms to show their intention to remove online content culminates in a meeting of the G7 nations in Italy.
Interior ministers will gather in Rome on October 20 to decide whether enough progress has been made.
Source: http://www.itv.com/news/2017-09-20/internet-giants-told-to-remove-terror-propaganda-within-two-hours-or-face-fines/