The NRA Has Been Ridiculed For Joining Forces With Author Amelia Hamilton To Create Gun-Friendly Takes In Children’s Tales. 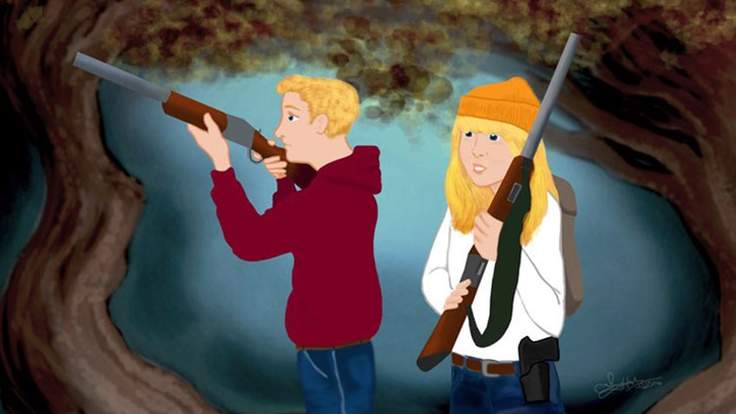 America’s biggest gun rights group has armed beloved fairy tale characters in its own twist on some children’s classics.

Campaigners have ridiculed the National Rifle Association after it joined forces with author and conservative blogger Amelia Hamilton to create the gun-friendly takes on the tales.
In Hansel and Gretel (Have Guns), the brother and sister head out into the woods armed with hunting rifles in the search for food for their family.

Following a successful hunt the pair come across a witch’s cottage made of gingerbread, where they rescue two young boys being fattened up for the hag’s stew.
In another recreated classic, a hungry wolf learns not to mess with the gun-toting team of Little Red Riding Hood and grandma.
“So, with a kiss from her mother, rifle over her shoulder and a basket for her Grandmother in her hands, Red took a deep breath and entered the woods,” goes the revised tale of Little Red Riding Hood (Has a Gun).
Red uses her rifle to frighten off the sinister wolf in the forest, but the hungry beast’s day only gets worse when his attempt to beguile the grandmother ends with the elderly woman cornering him with her “scattergun”.
“Oh, how he hated when families learned how to protect themselves,” the tale goes.
Ms Hamilton told Sky News the idea of recreating the classics for the NRA came after a friend joked that had Red and her grandmother “been able to protect themselves, all of the violence in the original story (and there is a lot of violence) could have been avoided”.
“I started thinking about other fairy tales, and how so many of the characters go through unnecessary, horrible things that could easily be avoided if they were able to protect themselves,” Ms Hamilton said in an email.
However, the Coalition To Stop Gun Violence wrote on Facebook that the revised tales “corrupts children and encourages them to take on significant, and unnecessary risks”.
A Facebook group called Repeal The Second Amendment called the gun-friendly stories “absolutely sick”.
But Ms Hamilton said she took tales that were “incredibly violent” in their original forms and made them “stories about safety and responsibility”.
“In that process, I removed all of the violence, so I don’t see how they are sick at all,” she said.
Ms Hamilton said she is currently working on a Three Little Pigs version.
Source: http://news.sky.com/story/1666542/nra-adds-guns-to-classic-childrens-tales