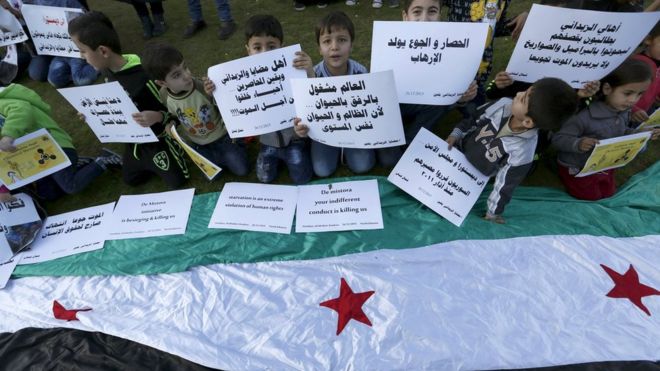 The Syrian government has agreed to allow aid into the besieged rebel-held village of Madaya, the UN says, amid reports of residents starving to death.

The UN humanitarian co-ordinator said it was planning to deliver humanitarian assistance “in the coming days”.
Aid agencies say conditions in Madaya, near Damascus, are “extremely dire”.
The UN said it also had government permission for access to Kefraya and Foah in the north but, unlike Madaya, these are besieged by rebel forces.
Up to 4.5 million people in Syria live in hard-to-reach areas, including nearly 400,000 people in 15 besieged locations who do not have access to the life-saving aid they urgently need.

Madaya, which is about 25km (15 miles) north-west of Damascus and 11km from the border with Lebanon, has been besieged since early July by government forces and their allies in Lebanon’s Shia Islamist Hezbollah movement.
The UN said it had received credible reports of people dying from starvation and being killed while trying to leave. On 5 January, a 53 year-old man reportedly died of starvation while his family of five continues to suffer from severe malnutrition, it said.
Save the Children also warned on Thursday that “more children will die in the coming days and weeks unless food, medicine, fuel and other vital aid is immediately allowed into… Madaya”.
Aid lorries delivered medical and humanitarian supplies to the village in October, and medical evacuations took place in December, but it has been inaccessible since then, despite numerous requests for access.
Conditions have worsened with the onset of winter.

A Syria-based spokesman for the International Committee of the Red Cross, Pawel Krzysiek, told the BBC on Wednesday that he had visited Madaya during the last aid delivery and that the situation was now “even more dire”.
“People here have started eating earth because there’s nothing left to eat,” Madaya resident Abdel Wahab Ahmed, told the BBC on Thursday. “Grass and leaves have died because of the mounting snow.”
He described the lack of medical facilities for the sick and vulnerable as “terrifying”.