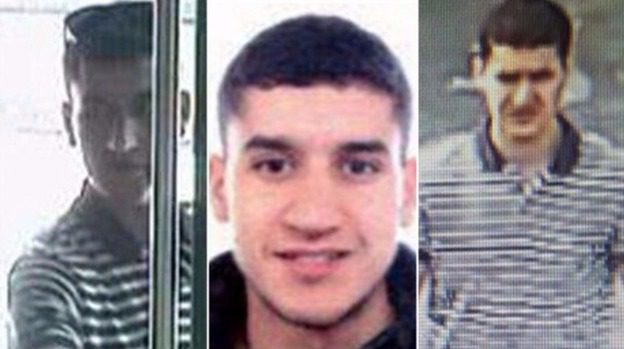 Spanish police say they have shot and killed Younes Abouyaaqoub, the man identified as the driver in a deadly van attack in Barcelona last week.
Police shot Abouyaaqoub near Subirats, west of Barcelona, on Monday afternoon after being alerted to the presence of a suspicious man.
Authorities gave few immediate details of the incident, saying the suspect was wearing what seemed to be a suicide belt. A bomb disposal robot was dispatched to approach the man’s body after he was shot down, police said.
Abouyaaqoub had been the focus of an extensive international manhunt after authorities said he used a van to mow down pedestrians in Barcelona’s famous Las Ramblas promenade on Thursday, killing 13 people and injuring more than 120 others.
Police also said he stabbed a driver to death and hijacked his car on Thursday night in his getaway.
“The Catalan police have shot dead Younes Abouyaaqoub, driver of the van and direct perpetrator of the attack in Barcelona on Thursday causing the death of 14 people,” Carles Puigdemont, president of the Catalonia region, told reporters on Monday.

Al Jazeera’s Sonia Gallego, reporting from Barcelona, said that a female resident of Subirats had tipped off police, after spotting a man who was acting suspiciously.
As they approached the man in question, he reportedly lifted his shirt to show an explosive belt, prompting police to shoot him.
Earlier on Monday, authorities had said they now had evidence that Abouyaaqoub, 22, drove the van that ploughed down the Las Ramblas promenade, in an attack claimed by the Islamic State of Iraq and the Levant (ISIL, also known as ISIS) group.
“He was the only person who was still at large and had been a prime person of suspect,” Al Jazeera’s Gallego said.
The other suspects in a cell of 12 people thought to be behind the attack have been arrested, shot by police or killed in an explosion at a house in Catalonia a day before Thursday’s van attack.
The attack in Barcelona was linked to another outburst of violence hours later in the resort down of Cambrils, further down the Mediterranean coastline from Barcelona.
A car crashed into passers-by there, and attackers reportedly got out to tried and stab people. Five suspects were shot dead, while a Spanish woman died in the attack, which was also claimed by ISIL.

Following the confirmation of Abouyaaqoub’s death, Spanish police said that the operation into the Barcelona cell remained open, including at international level.
“Today the 12 names that we have always referred to are in the hands of the justice system, or sadly, as a result of their actions, have been killed,” Josep Lluis Trapero, Catalan police chief, told reporters, on Monday.
“But we have said that we were opening up the range of relations in the international field, and this will develop in the coming weeks,” he said, adding that the operation was not closed.
Trapero also confirmed that the imam believed to have been the ringleader of the cell had been killed in an accidental explosion at the suspects’ bomb factory.
Asked whether Abdelbaki Es Satty had died in the blast on Wednesday that precipitated the attacks, Trapero said: “It is confirmed,” adding “the remains of the imam were there”, in the house in Alcanar that exploded.
Source: http://www.aljazeera.com/news/2017/08/man-shot-search-barcelona-van-attack-suspect-170821144103455.html