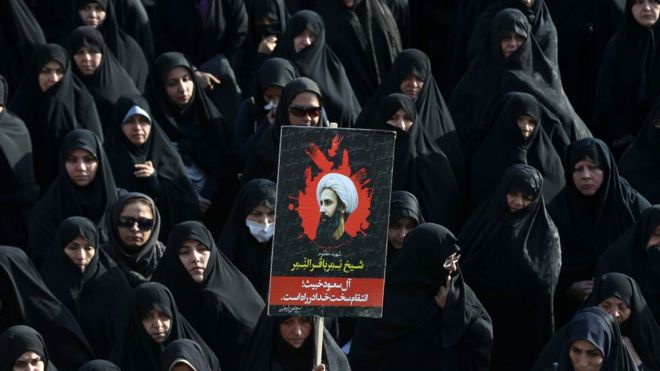 A number of Saudi Arabia’s allies have joined diplomatic action against Iran after the Saudi embassy in Tehran was attacked amid a row over the execution of a Shia Muslim cleric.

Bahrain and Sudan have both severed relations with Iran, and the UAE has downgraded its diplomatic team.
Saudi Arabia on Sunday severed ties and gave Iran’s diplomats two days to go.
Saudi Foreign Minister Adel al-Jubeir said trade links with Iran would be cut and air traffic links stopped.
But in an interview with Reuters news agency, Mr al-Jubeir also said Iranian pilgrims travelling to holy sites in Mecca and Medina would still be allowed to enter.
Saudi Arabia and Iran are respectively the key Sunni and Shia powers in the region and back opposing sides in Syria and Yemen.
On Monday, a White House spokesman called on both countries to “show some restraint and to not further inflame tensions that are on quite vivid display in the region”.
Great rivalry explained: Why don’t Iran and Saudi Arabia get along?
Spiralling tensions: Why crisis is ‘most dangerous for decades’
How row is playing out: Iran and Saudi media reaction
Sheikh Nimr al-Nimr: Who was leading Saudi Shia cleric?