RZA Talks About ‘The Man With The Iron Fist’ 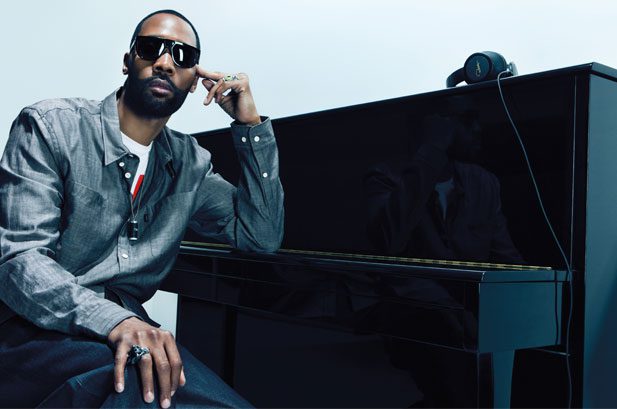 When Robert ” RZA” Diggs was pillaging old kung-fu flicks as a New York teen, he never imagined he’d one day be directing one. Since producing the landmark “Enter the Wu-Tang: 36 Chambers” (Loud) in 1993 and spawning the lengthy, fruitful career of the Wu-Tang Clan, the Grammy Award-winning beatsmith has tapped into nearly all sides of the entertainment industry: collaborating with everyone from the Black Keys to Kanye West, penning two books and landing roles in films including “Funny People” and “American Gangster.”
This month, RZA makes his directorial debut with “The Man With the Iron Fists,” a kung-fu film starring Lucy Liu and Russell Crowe that’s “presented by” Quentin Tarantino. The film’s soundtrack, which bowed at No. 31 on the Billboard 200, was his label’s (Soul Temple Records) first release, and the film opened with $7.9 million, according to Box Office Mojo.
1. What was the biggest difference between producing an album and directing a film?
The amassment of work and people. It’s hard work to make an album, but there’s maybe 12 people that help. For a film, you’re talking about a cast and crew of 400-600 people. Doing music videos is one thing-maybe two days to prepare. This is more like 100 days of preparation, 60 days of filming, another 100 days of editing. This thing took a lot of time.
2. What were you able to do with special effects and fight scenes in this film that wasn’t possible during the golden era of kung-fu films?
Well, take a movie like “Five Deadly Venoms.” You’ve got the Toad, where you couldn’t penetrate his skin, and you had to find his weak spot. In today’s technology, we could take an idea like that and make brass bodies. A guy who’s able to channel his chi and turn his whole body to solid metal. We got the actor to act it all out, and then took a CGI copy of his body and made it brass.
3. One of the more notable songs on the soundtrack is Kanye West‘s “White Dress.” How did that come together?
Kanye is a great artist. I had a chance to work with him on [his ‘My Beautiful Dark Twisted Fantasy‘] and [West and Jay-Z‘s] ‘Watch the Throne.’ When I got back from [filming in] China, I was in my editing room and I reached out to him to come look at a scene and potentially give me a song for the score and soundtrack. He came through, dug what he saw and wrote this song for us. He killed it.
4. Also on the soundtrack are Brooklyn upstarts the Flatbush Zombies. Are there other new MCs you have an eye out for?
Joey Bada$$ is representing good. A$AP and them, I love that crew. Meek Mill and Wale. Kendrick Lamar and his folks. It took time, but now my generation can say, “OK, we’ve got some talent in the driver’s seat. Hip-hop will go on.” The only thing they need is consciousness. We all like to party. But at the same time you want some imagery out there representing social consciousness and awareness. My generation had that balance. Now we could use some of that.
5. Do you plan to write more books?
Yeah, I’m already working on it, putting down some beautiful ideas. Sometimes a man is shy to expose his life. But I realize my life sometimes helps other brothers escape hell. Reading about Jesus — not comparing myself to Jesus — but reading the Good Book and of men of history, we see them make it through challenging times. It helps us when we face these odds. The master always leaves clear footprints, and I’m trying to leave some footprints for these kids so they can say, “Hold on, man, I know which way to go.”
6. Several artists have taken executive positions at major labels recently. Have you been approached by anyone, and would you be interested?
I haven’t been approached by anyone. I’m really comfortable with filmmaking. A director’s an executive: He’s got to have his hands on music, he has to know how to control talent-all these things that I did as a producer I can do as a director and more. I don’t just do things for myself, honestly. I want brothers who come from my hood and any urban area to realize, it’s many paths we can take. And I’m proving that as one man-imagine what they could do.
http://www.billboard.com/charts/rap-albums#/news/rza-talks-kanye-west-collabo-co-signs-joey-1008011082.story