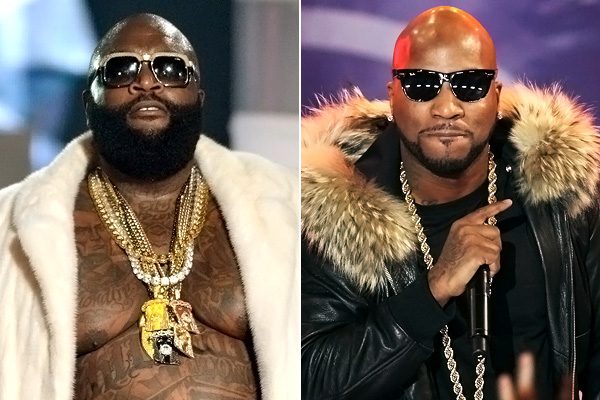 ATLANTA — Rick Ross‘ Maybach Music camp is involved in quite a bit of drama, with both Young Jeezy and 50 Cent’s camp.
During Saturday’s (September 29) taping for BET’s 2012 Hip-Hop Awards in Atlanta Rozay and the Snowman reportedly got into a shoving match backstage before the scuffle spilled outside into the parking lot. Shots were fired and at least one man was said to be arrested.
That’s not all. Multiple sources who witnessed the fray confirmed to MTV News that Ross’ protégé Gunplay was also involved in fisticuffs with members of 50 Cent’s G-Unit camp. Gun was seen with visible wounds and a witness told us that the Miami MC was put into handcuffs and detained, but a separate source close to Gunplay told us that he was not arrested.
Most of the crowd inside the Atlanta Civic Center, where the taping took place were unaware of the drama that jumped off around the same time that A Tribe Called Quest, Missy Elliott and Busta Rhymes paid tribute to fallen music mogul Chris Lighty. 50 Cent and Fat Joe, who have quarreled repeatedly semed to have put their differences aside for the moment as they too appeared on stage to honor Lighty. Both Rick Ross and Jeezy also performed different sets during the award show.
Photos from the BET Hip Hop Awards red carpet.
New York DJ Funkmaster Flex took to Twitter to broadcast his account. “Jeezy and Rick Ross just had words backstage!! Pushing and shoving,” Flex wrote. “Shots fired in parking lot!!! Gunman arrested!!!”
Machine Gun Kelly also seemed to get caught up in the whirlwind as well. “Got mase in my eyes. That beef sh– just got real,” he tweeted.
A spokesperson for the Atlanta Police Department told TMZ, “Shortly after 7:15 pm Saturday, a fight broke out in the parking lot at the Atlanta Civic Center (where the awards were being taped) between two groups. Officers on scene responded to break up the fight and used OC spray [commonly known as pepper spray] in the process. Individuals fled the scene. There were no arrests or reports of serious injuries. Reports of shots fired appear to be untrue.”