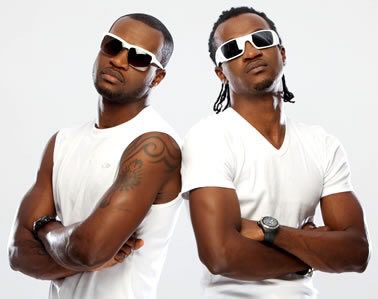 [wpvideo aDpLhAPu ]
A video of brothers, Paul and Peter Okoye of P-Square, along with their brother/manager Jude Okoye in a scuffle at their lawyer’s office has been released online.
News had surfaced on Sunday of the group’s intention to disband, after Peter reportedly sent a termination letter to their lawyer, Festus Keyamo, demanding a termination of the partnership agreement between the brothers.
In this new viral video, Jude can be seen and heard threatening to beat up Peter, who was behind the camera.
Paul also featured in the video, telling Peter, “Shame on you.”
Meanwhile, Paul, has trolled Peter over the released video on twitter.
His tweet read, “Wow!!!! And he finally released the all mighty video lol.”
In March 2016, the duo had a difference in opinion regarding what Peter perceived as lopsidedness in the individual input of songs which was getting featured on their joint albums with Paul getting a lion share of his songs selected.
This led to Peter refusing to engage with P-Square for weeks. Peter then relocated, taking his wife and kids from the mansion they both lived for years and accommodated their extended family in.
A lawyer was also involved to help split their fortune, as they were both involved in joint ventures over the years
This is the third time that the Okoye family feud will be coming to the fore. This time around, it appears that the twin singing sensation may finally be splitting for good.
Following this new development, the most pressing thought in the minds of fans and music lovers is which of the two talented brothers will rock the Nigeria entertainment industry better as a solo artiste.

Try watching this video on www.youtube.com, or enable JavaScript if it is disabled in your browser.