Pope Francis to Mexican Ruling Elite “Public officials Must Be Honest And Upright, And Not Be Seduced By Privilege Or Corruption” 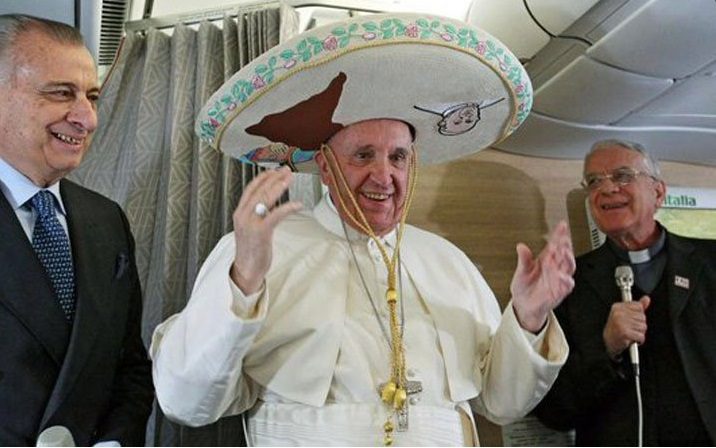 Mexican leader and other members of the government that public officials must be honest and upright and not be seduced by privilege or corruption.Pope Francis has kicked off his first trip to Mexico, riding past cheering crowds in his popemobile, before issuing tough messages to the country’s political and religious elite.

As his vehicle pulled out of the residence where he is staying, the pontiff stopped to greet elderly, sick and disabled people who had gathered outside.

Tens of thousands more lined his motorcade route to the heart of Mexico City as Francis enjoyed a warm welcome from the largest Spanish-speaking Catholic country in the world.
The welcome contrasted sharply with the pope’s subsequent pointed criticism of how church and state leaders in Mexico have failed their people, especially the poor and marginalised.
Pope And Patriarch Meet After 1,000-Year Rift

Francis headed to the presidential palace, where he met President Enrique Pena Nieto.
He told the Mexican leader and other members of the government that public officials must be honest and upright and not be seduced by privilege or corruption.
Francis said: “Experience teaches us that each time we seek the path of privileges or benefits for a few to the detriment of the good of all, sooner or later the life of society becomes a fertile soil for corruption, drug trade, exclusion of different cultures, violence and also human trafficking, kidnapping and death, bringing suffering and slowing down development.”
In another hard-hitting speech, this time to his own bishops, Francis challenged church leaders known for their deference to Mexico’s wealthy and powerful to denounce the “insidious threat” posed by the drug trade and to not hide behind their own privilege and careers.
He told them to be closer to their people and to develop a coherent plan to help Mexicans “finally escape the raging waters that drown so many, either victims of the drug trade or those who stand before God with their hands drenched in blood, though with pockets filled with sordid money and their consciences deadened”.
The speech drew a lukewarm reaction, with only a handful of bishops giving the pope a standing ovation.
Francis will finish his day with a Mass at the Basilica of the Virgin of Guadalupe and a silent prayer before the icon.
On Friday, Pope Francis arrived in the capital to adoring crowds waving yellow handkerchiefs.
President Nieto and his wife met Francis on a red carpet, with onlookers cheered as the three walked together.
The Mexico trip follows a brief but historic meeting in Cuba on Friday with the Russian Orthodox Patriarch Kirill, a reconciliatory move following a 1,000-year split in Christianity.
Source: http://news.sky.com/story/1641520/cheering-crowds-greet-pope-francis-in-mexico