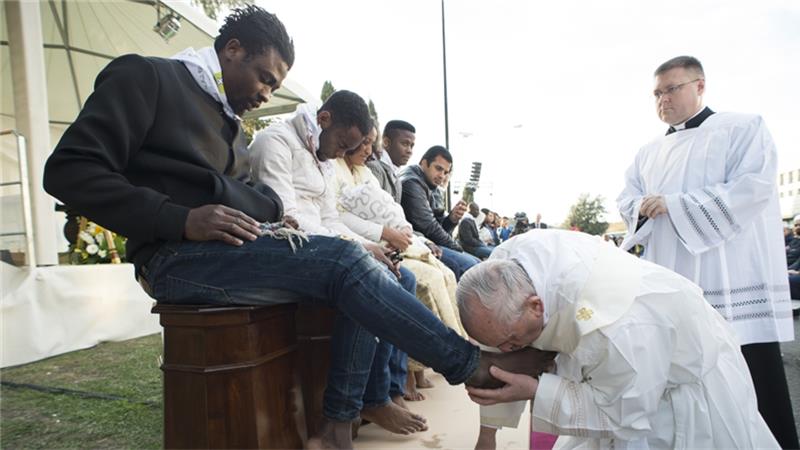 #WeGotYourBack #WeGotItCovered #BreakingNews #AljazeeraNews #CastelnuovoDiPorto #Rome #PopeFrancis #EasterWeekFootWashingCeremony #RefugeeShelter
Pope Francis has visited a refugee centre to wash and kiss the feet of Muslim, Orthodox, Hindu and Catholic refugees — a gesture of welcome at a time when anti-Muslim and anti-immigrant sentiment has risen after the Brussels and Paris attacks.
Francis celebrated the traditional Easter Week foot-washing ceremony at a refugee shelter in Castelnuovo di Porto, outside Rome, inaugurating the most solemn period of the Catholic Church’s Easter season.
The Holy Thursday rite re-enacts the foot-washing ritual Jesus performed on his apostles before being crucified, and is meant as a gesture of service.

Francis was greeted with a banner reading “Welcome” in a variety of languages as he processed down a makeshift aisle to celebrate the outdoor Mass.
A fraction of the 892 asylum seekers living at the shelter attended, though others milled around nearby and filmed the event on their smartphones.
Vatican rules had long called for only men to participate in the ritual, and past popes and many priests traditionally performed it on 12 Catholic men, recalling Jesus’ 12 apostles and further cementing the doctrine of an all-male priesthood.
But after years of violating the rules outright, Francis in January changed the regulations to explicitly allow women and girls to participate.

The Vatican said on Thursday that four women and eight men had been selected. The women include an Italian who works at the centre and three Eritrean Coptic Christian migrants. The men include four Catholics from Nigeria, three Muslims from Mali, Syria and Pakistan, and a Hindu from India.
The new norms said anyone from the “people of God” could be chosen to participate in the ceremony.
While the phrase “people of God” usually refers to baptised Christians, the decree also said that pastors should instruct “both the chosen faithful and others so that they may participate in the rite consciously, actively and fruitfully”, suggesting that the rite could be open to non-Catholics as well.
Source: http://www.aljazeera.com/news/2016/03/pope-francis-washes-refugees-feet-easter-week-160324173339136.html