PM Liz Truss Resigns After Only Six Weeks In Office 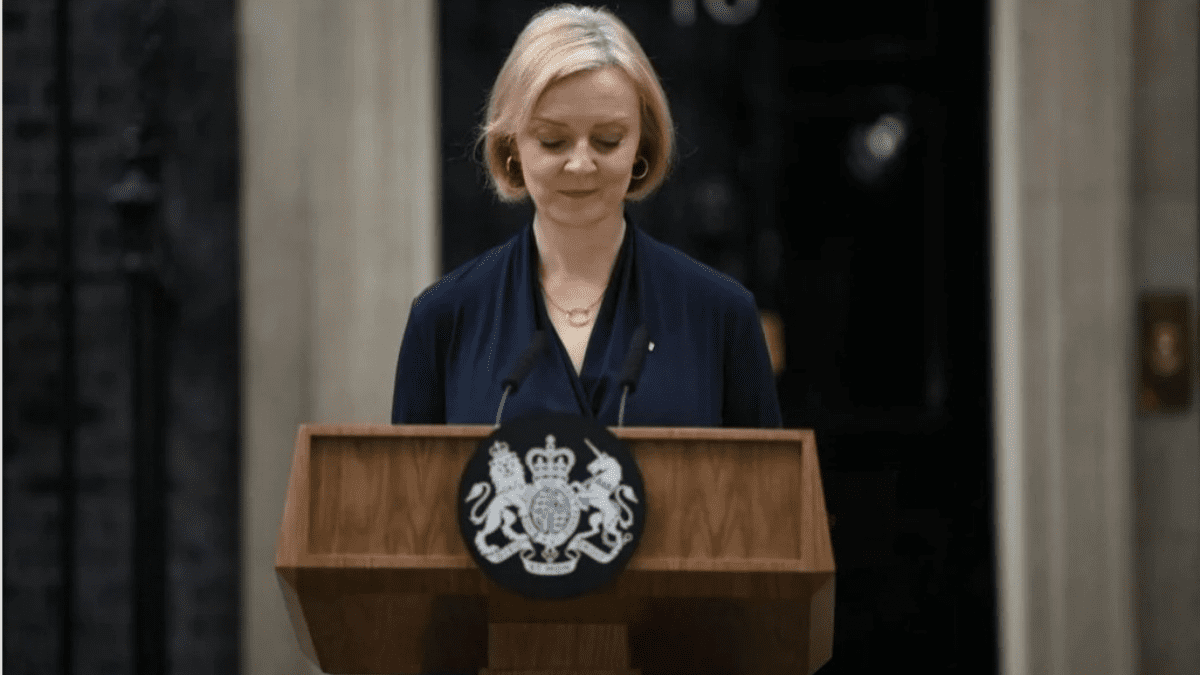 After intense pressure from Conservative lawmakers, Truss has finally left Downing Street. While she admitted that “mistakes were made,” she emphasized that she was a “fighter, not a quitter.”

After announcing her resignation from Downing Street, Liz Truss said she would step down as prime minister and hold an emergency contest to choose her successor.

It comes after a tumultuous 45 days in power, during which Truss’s mini-budget collapsed the markets and she lost two important ministers and the confidence of almost all of her own MPs.

After meeting with Graham Brady, chair of the 1922 Committee of backbench Tory MPs, at Downing Street, the prime minister made her statement, later joined by her deputy prime minister Thérèse Coffey and the party chair Jake Berry.

After Liz Truss’s resignation, the threshold for becoming prime minister was lowered to 100 nominations from Conservative MPs.

“a vision for a low-tax, high-growth economy that would take advantage of the freedoms of Brexit,” Truss said as she took office.

“This morning I met the chairman of the 1922 Committee, Sir Graham Brady. We’ve agreed that there will be a leadership election to be completed within the next week. This will ensure that we remain able to deliver on our fiscal plans and maintain our country’s economic stability and national security. “I will remain as prime minister until a successor has been chosen.”

Brady informed reporters that the party will elect a new head within the next week and that party members may have a say in the process. At 4 o’clock, the 1922 executive and the board of the Conservative Party will meet to decide how the election will proceed, which may involve setting a high bar for MP nominees.

Brady stated that they wanted to have a new leader in place by the 28th of October, allowing the planned fiscal event to take place on the 31st of October, just three days after the new prime minister takes office.

Jeremy Hunt, the current chancellor, and Michael Gove, a former cabinet minister, have both publicly said that they will not be running for leader. Rishi Sunak, the ex-chancellor, and Kemi Badenoch, the current secretary of international trade, are both possible contenders. Penny Mordaunt and Grant Shapps are two others that fit the bill. It’s also possible that Boris Johnson may make a comeback.

“After 12 years of Tory failure, the British people deserve so much better than this revolving door of catastrophe,” Keir Starmer declared. Over the past few years, the Conservatives have pushed taxes to all-time highs, defunded essential government programmes, and triggered a crisis in the cost of living. The economic collapse they’ve caused will likely result in homeowners paying an extra £500 each month on their mortgages. Repairing the harm they’ve caused will take a long time.

The Labour leader added that the Tories shouldn’t react by “shuffling the individuals at the top without the approval of the British people.”

“It was inevitable that Liz Truss would have to go after the harm she’s inflicted,” said Ian Blackford, leader of the SNP in Westminster, “but merely replacing leaders of a dysfunctional Tory government is not enough.” “A general election is now required; the public will tolerate no less.”

“The Tory instability has spiralled beyond any pretence that the country has a sustainable government,” Carla Denyer, co-leader of the Green Party, said.

Although the September mini-budget was widely perceived as a team effort, Truss had her chancellor at the time, Kwasi Kwarteng, take the heat for it. In response to the £45 billion in mainly unfunded tax cuts, the market panicked, sending the pound plunging and the cost of new government debt soaring.

What happened on Kwasi Kwarteng’s final day as chancellor is documented in this video.

Truss fired Kwarteng because some of her MPs didn’t like how much their mortgages were going up, but MPs didn’t know why she should stay on since she had also been a strong supporter of tax cuts.

A further embarrassment occurred when Hunt, in an effort to restore stability, declared that practically all tax cuts would be rescinded and that Truss’s centrepiece proposal to regulate energy costs would be significantly watered down.

Chaos in the voting lobbies on Wednesday during a vote on a Labour resolution about fracking appears to have been the final straw for many Tory MPs. After that, at least a dozen rebelling Conservative MPs didn’t know whether or not they still had the whip.

When a British Asian becomes prime minister for the first time, there should be more cause for celebration. But multimillionaire former banker and Brexiteer Rishi Sunak is the fourth consecutive Tory to obtain the top job without having to face the electorate. Democracy takes a hit when this happens.

To reverse Britain’s shocking fall over the past six years, Sunak faces formidable obstacles. Nonetheless, we will not give him a pass. Over the past 12 years, journalists from the Guardian have helped shed light on the problems of the Tory party, from the harshness of austerity to the self-destructiveness of Brexit to the shocking incompetence of previous leaders.