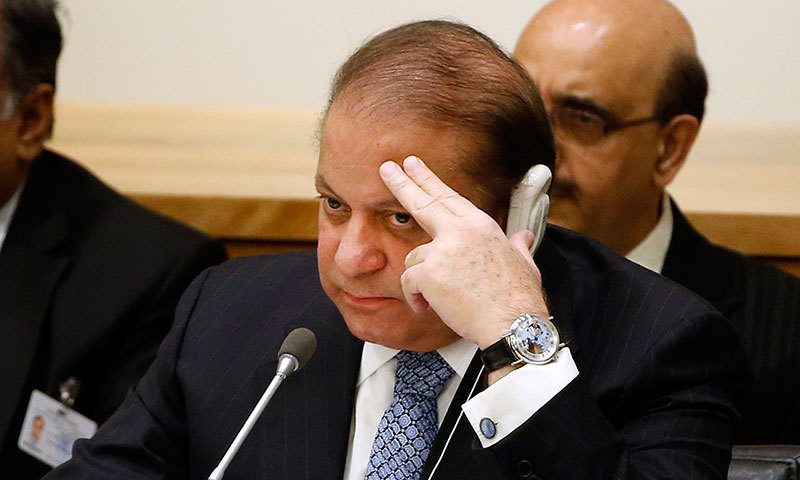 Islamabad, Pakistan – Overthrown Pakistani Prime Minister Nawaz Sharif has appeared before an anti-corruption court in the capital Islamabad, putting to rest the possibility of political unrest if he boycotted proceedings.
Sharif appeared before the court briefly on Tuesday morning, amid tight security and a number of supporters chanting slogans outside the court complex.
Speaking to the press following his appearance in court, a defiant Sharif said he would continue to face the anti-corruption trial, but that he considered the process biased against him.
“Is this justice? Is this what we call the rule of law? Is this a fair trial?” he said, providing a list of grievances against the Supreme Court verdict against him, highest of which is his perceived denial of a right to a full appeal.

“This is the first case in the country’s 70-year history where the whole force of the law has been put behind the petitioner, and the defence has been denied all of its constitutional and human rights,” he said.
“They [the Supreme Court] were determined to dismiss me, that is why they took up the issue of the [undeclared asset].”
Sharif was dismissed from office on the grounds that a salary he says he never received still constituted an asset, and he was legally required to declare it.
The National Accountability Bureau (NAB) court said it would indict Sharif in three corruption cases on October 2. Sharif has consistently denied all allegations of wrongdoing.
The overthrown prime minister had failed to appear for an earlier hearing on September 19. He had travelled to London last month, saying he had to attend to his ailing wife Kulsoom, who is undergoing cancer treatment in the United Kingdom.
Sharif was dismissed from office by the Supreme Court in July for an omission in a parliamentary wealth declaration. The court had also ordered the national anti-corruption watchdog to open several cases against him, three of his children and several aides.
On September 15, the Supreme Court dismissed Sharif’s petitions seeking a review of that judgment and a halt to any anti-corruption proceedings.
Following that verdict, Maryam Nawaz Sharif, Nawaz’s daughter, had suggested her father may not return to the country to face the corruption charges, which are linked to four posh London apartments, two steel mills in Saudi Arabia and several holding companies in the UK.

“He should not [appear before the NAB court]. Must not. Should not be a part of political & personal victimisation in the garb of accountability. It’s a FARCE,” Maryam, who is also facing corruption charges, tweeted last week.
Sharif landed in the Pakistani capital on Monday, and held a series of meetings with political aides through the day, including with his successor as prime minister, Shahid Khaqan Abbasi.
Abbasi, a staunch party loyalist, was elected on August 1, after an easy victory in parliament, which Sharif’s PML-N party still controls.
The investigation into the Sharif family’s wealth stems from revelations made in the 2016 leak of 11.5 million documents from the Panama-based law firm of Mossack Fonseca.
Several documents included in the leak showed three of Sharif’s children – Hussain, Hasan and Maryam – owned at least three off-shore companies registered in the British Virgin Islands.
The documents showed that these companies had engaged in deals worth $25m.
Crucially, one of the documents also revealed that the companies had been involved in a $13.2m mortgage involving the London properties as collateral, the first time the Sharif family’s ownership of the apartments was proven on paper.
Sharif’s political opponents allege that his family gained this wealth during his previous two terms as prime minister in the 1990s.
The corruption investigation has since expanded to include two steel mills based in Saudi Arabia as well as 16 holding companies operated by his sons.
It has also grown to include three of Sharif’s children: Maryam Nawaz, his political heir apparent, as well as sons Hussain and Hasan.
On Tuesday, the NAB court issued bailable arrest warrants for Maryam, her husband Muhammad Safdar, and Hasan and Hussain, for failing to appear for any hearings in the cases so far.
Earlier, the court said it would be indicting Finance Minister Ishaq Dar, a close Sharif aide, this week in a case related to the Sharif’s alleged corruption.
Source: http://www.aljazeera.com/news/2017/09/nawaz-sharif-appears-anti-corruption-court-170926063512762.html