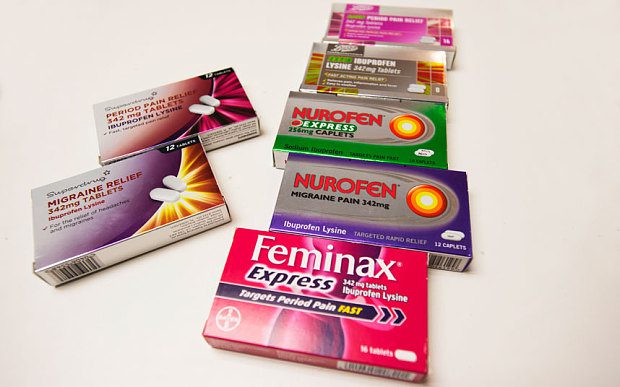 Research suggests patients are paying three times too much, as Nurofen is panned in Australia for selling identical painkillers for specific ailments

One of Britain’s biggest painkiller brands, Nurofen, uses identical ingredients in pills that claim to tackle a different ailments, a court has found, prompting experts to warn that patients are overpaying for so-called “targeted” medicines.

Nurofen offers different packs of branded drugs depending on whether the buyer is suffering from migraines, period pains, tension headaches or back pain.
Its targeted pills are different to standard Nurofen as they contain salts that break down more quickly in the digestive system, providing faster pain relief. They are also more expensive.

But a court in Australia ruled that the products should be removed from the shelves there after finding that, apart from the packaging, all the targeted pills were identical to each other.
Each contains exactly the same amount of ibuprofen, is put together with the same ingredients – and even has the same drug licensing code.
Separately an investigation by the consumer group found that the Nurofen “targeted” tablets contained the same drugs, in the same quantities, as pharmacy and supermarket own-brand versions that were a third of the price.
Richard Headland, editor of consumer group Which?, said: “You might think Nurofen Migrain Pain and Nurofen Tension Headache caplets would target your migraine and tension headaches respectively, but you’d be wrong: ibuprofen can’t target pain in specific body parts.”
With the fast-acting Nurofen painkiller range due to will stay on sale in Britain, he advised shoppers to opt for cheaper versions in pharmacies and supermarkets.
Each caplet of Nurofen Migraine Pain contains 342mg of ibuprofen lysine – a fast-acting version of ordinary ibuprofen – and costs 22p. Nurofen Tension Headache caplets contain the same ingredients but cost 23p.
By contrast, Asda Migraine Relief also contains 342mg of Ibuprofen Lysine, but costs 11p. Wilko Express Pain Relief containing the same quantity of ibuprofen lysine cost just 8p – around a third of the price for the Nurofen version.
Read more: http://www.telegraph.co.uk/news/health/news/12050638/Painkiller-rip-off-Pills-for-migraine-period-pain-backache-are-identical.html
**********************WE GOT IT COVERED********************
Continue to like, comment and follow MicstagesUK, for the latest: Gossip, Music News, Entertainment News, Fashion, Current Affairs and Health
Facebook: Micstages UK  Twitter: @MicstagesUK  Gmail: MicstagesUK