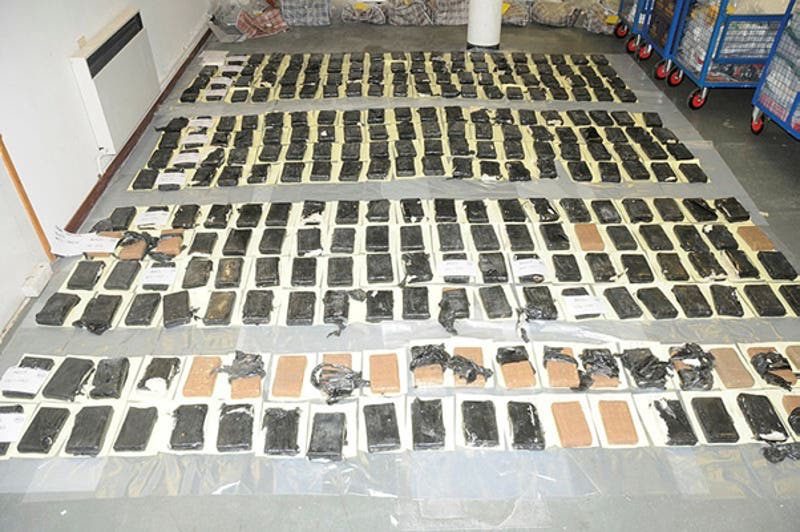 ‬https://youtu.be/bCLSfEmy8vk
Police hail ‘unparalleled victory against the kingpin criminals’ after £54m and tonnes of drugs seized

Police have arrested more than 700 suspects, seized £54m in cash and tonnes of drugs in the UK’s “biggest and most significant” operation ever against organised crime.

Officials said previously “untouchable” kingpins who have evaded justice for decades, while enjoying “flashy” lifestyles, were among those detained.

High-level gangs, including those importing guns, drugs and people into Britain, have been targeted in a series of raids after law enforcement agencies accessed a secretive communications network.

Known as EncroChat, it was used on bespoke mobile phones that were designed to be secure against police infiltration and examination.

But in April, an international team cracked its encryption, started spying on users and harvesting their data as they carried on unawares.

“There were 60,000 users worldwide and around 10,000 users in the UK,” the National Crime Agency (NCA) said as raids continued on Thursday morning.

“The sole use was for coordinating and planning the distribution of illicit commodities, money laundering and plotting to kill rival criminals.”

The platform was infiltrated by agencies in France and the Netherlands, and shared via Europol to partners including the UK.

“Unbeknown to users, the NCA and the police have been monitoring their every move since then,” an NCA spokesperson said.

“It is the biggest and most significant operation of its kind in the UK.”

Hundreds of staff worked to analyse the data and identify EncroChat users, working through millions of messages and hundreds of thousands of images.

It resulted in 746 arrests across the UK so far, including “high-value targets” and “iconic” fugitives who had previously escaped justice.

The operation has also revealed the identities of an unknown number of corrupt police officers and employees in different law enforcement agencies.

Officials said that while police operations against gangs frequently see lower-level operatives who “get their hands dirty” arrested while those at the top remain free, EncroPhones were only used by the “middle tier upwards”.

“By dismantling these groups, we have saved countless lives and protected communities across the UK,” he added.

Raids have so far seen more than £54m in criminal cash seized, alongside 77 firearms and grenades, 1,800 rounds of ammunition, over two tonnes of Class A and B drugs and 28 million “street valium” pills from an illicit laboratory.

As a result of the intelligence seized, police and the NCA said they had prevented more than 200 “threats to life”, by stopping rival gangs carrying out kidnappings and executions.

In London alone, 1,400 EnroChat users were found. The Metropolitan Police said the operation enabled them to foil an assassination plot in June and arrest the would-be gunman.

Scotland Yard said it had detained members of one of the “most high-harm” OCGs in the capital, adding: “The central figures of this group lead lavish lifestyles and live in multimillion pound properties with access to top-of-the-range vehicles.

“They appear to be successful, respectable business people but they are dangerous individuals.”

Nikki Holland, the NCA’s director of investigations, likened the infiltration to “having an inside person in every top organised crime group in the country”.

“This is the broadest and deepest ever UK operation into serious organised crime,” she added.

“This is just the start of the operation and it will be going on for a long time yet … I’d say to any criminal who uses an encrypted phone, you should be very, very worried.”

The devices were “EncroPhones” – bespoke mobiles that claimed to offer complete anonymity with a built-in secure operating system, encrypted messaging and calls, self-destructing texts and even a “panic wipe” function.

The product, priced at £1,500 for a six-month contract, attracted organised crime groups across Europe.

Matt Horne, deputy director of the NCA, said the EncroChat network was “completely for criminal purposes”.

He said EncroPhones had become “a requirement” for organised criminal groups involved in the importation of drugs, guns and people to the UK, as well as large-scale money laundering.

The network was used for enforcing drug debt, fighting turf wars over competing markets, making threats and planning attacks or even assassinations.

An EncroChat-enabled phone was previously used by a hitman who murdered Liverpool gangster John Kinsella in May 2018.

The Europe-wide operation against European users started in April, but Ms Holland said the timing during the coronavirus pandemic was a coincidence.

She added that it had “worked to our advantage because more criminals were at home when we came calling”, and police had greater capacity because of a drop in crime.

Police were forced to “intensify” activity on 13 June after EncroChat’s operators realised their platform had been penetrated.

“Today, we had our domain seized illegally by government entities,” read a message sent to users. “We can no longer guarantee the security of your device … you are advised to power off and physically dispose of your device immediately.”

Messages between British users that were intercepted after the alert went out included one reading: “The police are having a field day.”

“If NCA then we have a big problem,” another added.

EncroChat servers have now been shut down but the home secretary, Priti Patel, said work against similar devices would continue.

“This operation demonstrates that criminals will not get away with using encrypted devices to plot vile crimes under the radar,” she added.