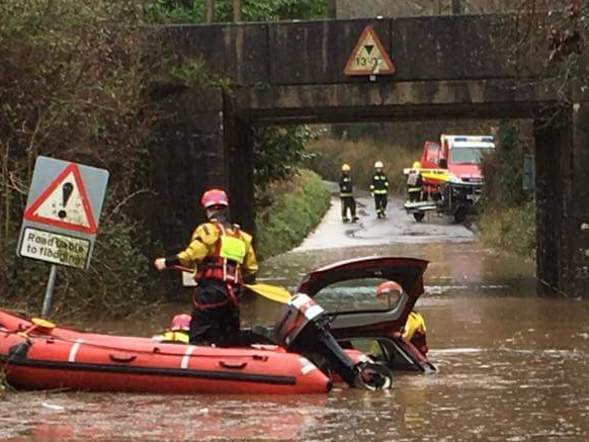 More than 100 flood warnings are in place as heavy rain and high winds brought on by Storm Frank batter the UK.

Thousands of homes in Scotland and Northern Ireland are without power and there are fears of fresh flooding in the north of England, with people in some areas urged to evacuate their homes.
Rivers in Dumfries and Galloway have burst their banks and water levels are still rising.
Residents in Newton Stewart have told Sky’s Gerard Tubb it is the worst flooding for 60 years.

The Scottish Environmental Protection Agency (SEPA) has more than 90 flood warnings in place – indicating “immediate action is required” – in addition to 14 “be prepared” flood alerts.
Aberdeenshire, Ayrshire and Dumfries and Galloway bore the brunt of the storm, which caused disruption to road, rail and ferry services across the country.
At present, three severe warnings – indicating a “danger to life” – remain in force in the north west of England.

In the south west there are more than 1,100 homes without power, while just under 200 remain cut off in Wales.
In Devon, an elderly couple had to be rescued from their flooded car, which was trapped under a railway bridge between the villages of Venton and Sparkwell.
Devon and Cornwall Police said water had reached the dashboard of the vehicle when a member of public helped free them.
In York, where the Foss Barrier is now operational following emergency work, police are investigating reports of burglaries at two flood-hit properties.
North Yorkshire Police Acting Superintendent Mark Grange said: “It is impossible to comprehend why anyone would want to bring further suffering to those who are already in a very vulnerable situation.”
Merseyside firefighters helped flood victims in the city rescue a family who were trapped in their car, the Liverpool Echo reported.

The newspaper said that a crew in a rescue boat used an inflatable sled to get to the two adults and two children, with the vehicle stuck in floodwaters approximately a metre high.
In Weston-super-Mare, Somerset, a section of the endangered Birnbeck Pier has collapsed due to the high winds, while repairs to a breach in the River Douglas at Croston in Lancashire were taking place on Wednesday.
However, Sky’s Tom Parmenter reports a Chinook helicopter that was delivering sandbags to fill a hole in the river bank has abandoned its flight due to the bad weather.
Read More: http://news.sky.com/story/1614066/over-100-flood-warnings-as-storm-frank-hits-uk