One Of 219 Chibok Schoolgirls Kidnapped By Boko Haram in 2014, Has Been Found Alive. 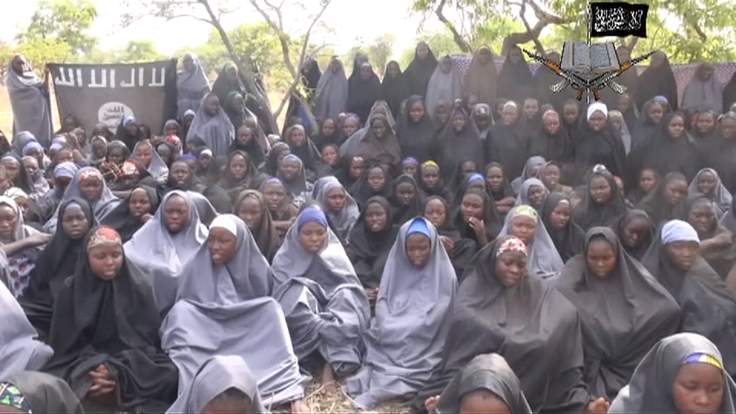 The first of 219 girls kidnapped by terror group Boko Haram in 2014 has been found alive, the Nigerian army has said.

“This is to confirm that one of the abducted Chibok schoolgirls… was among rescued persons by our troops,” army spokesman Colonel Sani Usman said in a statement.
Colonel Usman gave her name as Falmata Mbalala and said she was discovered in Baale, near the town of Damboa, 90km (56 miles) southwest of the Borno state capital, Maiduguri.
Activists and community leaders said she was found on Tuesday and brought to meet her mother in the town of Mbalala, near Chibok, before being taken to a military base in Damboa.
The 19-year-old’s uncle, Yakubu Nkeki, said she was pregnant and traumatised, but otherwise unharmed.

Amina Ali Nkeki was apparently found in the Sambisa Forest

Her father died while she was being held captive, Mr Nkeki said.
Manaseh Allan, a Chibok youth leader, told the AFP news agency: “The girl was found by local vigilantes in Kilakesa village on the edge of Sambisa Forest near Damboa.

“She was brought first to Chibok by the vigilantes who took her to the vice-principal of her school, who immediately identified her as Aisha Ali, which is her name in the school register.
“She was presented to community leaders as Amina Ali but her name as it appears in the school register is Aisha Ali.
“It is common for children in Chibok to be called with one name in school and another at home.”
A statement from the #Bringbackourgirls activist group quoted Falmata as saying the other girls were also in the Sambisa Forest area and were heavily guarded.
She is now thought to be travelling to the Borno state capital, Maiduguri.
There was international outrage when 276 girls – mostly aged between 16 and 18 – were abducted from their school in Chibok in April 2014.
More than 50 managed to escape over the next few months.
High-profile figures including American first lady Michelle Obama joined a campaign with the hashtag: #BringBackOurGirls.
Hope was briefly raised in April 2015 when the Nigerian military announced it had rescued 200 girls and 93 women from the Sambisa Forest.
It later emerged that the Chibok girls were not among them.
Boko Haram militants have killed an estimated 15,000 people and kidnapped hundreds of men, women and children during a six-year campaign to establish an Islamic caliphate in northeastern Nigeria.
Source: http://news.sky.com/story/1698206/first-kidnapped-chibok-girl-found-army