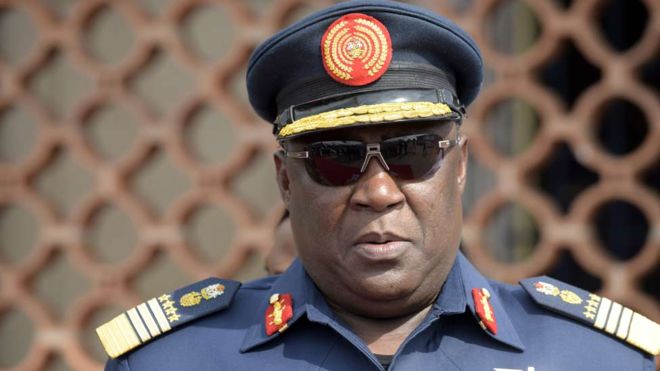 Retired Air Chief Marshall Alex Badeh denies 10 charges of fraud, criminal breach of trust and money laundering.
He was appointed chief of defence two years ago.
The BBC’s Martin Patience says ACM Badeh is the latest of several officials accused of stealing billions of dollars from the armed forces.
ACM Badeh is accused of using the funds to buy a mansion in the capital Abuja along with a string of other properties.
More than $1m in cash was also reportedly found at one of his homes.
Our correspondent said he was appointed when the military was coming under sustained criticism over its fight against Boko Haram militants.
Under former President Goodluck Jonathan, front-line troops complained that they were ill-equipped to fight the militants and discipline in the army was breaking down as soldiers refused to carry out orders.
An investigation has alleged that a total of $2bn (£1.3bn) meant to buy arms to fight Boko Haram had gone missing.
The former national security adviser, Sambo Dasuki, was charged in December in connection with the case involving $68m that is alleged to be missing. He was accused of awarding phantom contracts to buy helicopters, fighter jets and ammunition, which he denied.
Twelve other senior Nigerian army officers were handed over to the anti-corruption agency in February for their alleged involvement in the arms scandal.
Muhammadu Buhari won elections a year ago on promises to tackle both Boko Haram and corruption.