NIGERIA: Minister of Health Prof. Isaac Adewole “Monkeypox Has Been Confirmed In 11 States”. 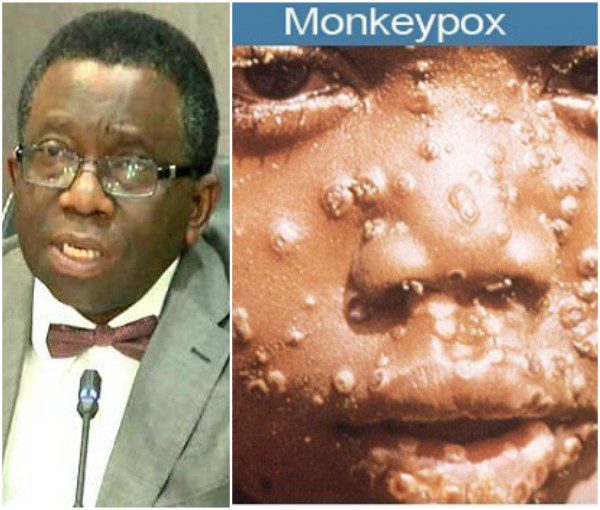 The Monkey pox virus outbreak has spread to 11 states with 74 suspected cases recorded, Minister of Health Prof. Isaac Adewole has said.
The Federal Government, on Oct. 11 confirmed that 33 suspected cases of the virus were recorded in seven states.
Monkeypox is a rare viral zoonosis (a virus transmitted to humans from animals) with symptoms in humans similar to those seen in the past in smallpox patients, although less severe.
Smallpox was eradicated in 1980. However, monkeypox still occurs sporadically in some parts of Africa. The minister, who updated the Council on developments in respect of the outbreak, listed the affected States as Akwa Ibom, Bayelsa, Cross River, Delta, Ekiti, Enugu, Imo, Lagos, Nasarawa and Rivers as well as the FCT.
“The Council also received an update on the state of the public health of the nation. We informed the council about the latest development in respect of the Monkey Pox virus outbreak. So far as of today, there are 74 suspected cases in 11 states of the country. “We have confirmed three from Bayelsa and 12 of the suspected cases from Bayelsa tested negative; four suspected cases from Lagos tested negative. We are still expecting the results of the other ones. “We are also doing test at the African Centre of Excellence for Genomics of Infectious Diseases (ACEGID), Edeh, to really understand the genomics of this virus. “Even when they are negative, the laboratory attendant should be able to tell us what exactly they are,’’ he said.
The minister dismissed the assertion that the military was spreading Monkey Pox virus through vaccination. He said that the military was never involved in any vaccination in the country, adding that any vaccination must involve state governments and the Federal Ministry of Health. “It is also important to dispel the rumor circulating in the country that the military is vaccinating people and trying to spread Monkey Pox across the country. “The military is not involved in any vaccination exercise. “And I must educate Nigerians about how vaccination campaigns are done. The Federal Government will take the lead but we do not conduct campaign without working with states. “So, there is no way we will do campaign without working with the states,’’ he said. The minister announced that his ministry was conducting vaccination in only three states of the federation, namely Borno, Kwara and Kogi. He stated that the cholera vaccination was being conducted in Borno while that of Yellow Fever vaccination was being carried out in Kwara and Kogi.
He stated that the ministry would soon start vaccination against measles while a nationwide vaccination against Yellow Fever would commence before the end of the year. Also addressing the correspondents on the outcome of the meeting, the Minister of Water Resources, Alhaji Suleiman Adamu, revealed that the Council approved N236 million for the completion of Sabke Irrigation Dam in Katsina State. He said the contract for the dam was initially awarded in 1997, re-awarded in 2009 after it was abandoned, but would now be completed by the current administration.
Source: https://www.vanguardngr.com/2017/10/monkey-pox-cases-increase-74-11-states-fg/