New York: Rubbish taking over pavements as binmen fail to show up after New Years 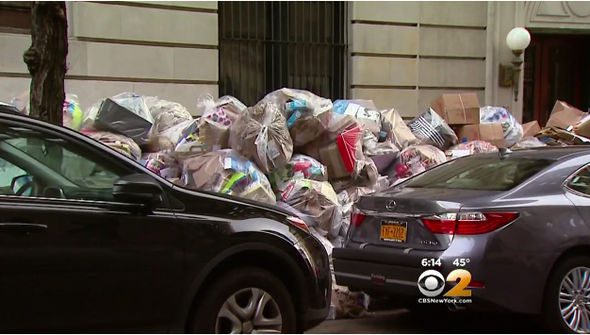 MOUNTAINS of recycling are clogging up pavements in New York after city chiefs failed to collect rubbish after New Year. Rubbish has “taken over” the pavements

Residents of Manhattan’s Upper West Side are reportedly “disgusted” at the mountains of refuse.
One resident of the affluent neighbourhood said she had “never seen anything like it”.

Residents have called the rubbish “disgusting” He said: “About 65 percent of the buildings on the Upper West Side are brownstones and they simply can’t hold more than four to five days of recyclable garbage – especially the week after Christmas.”
The burgeoning bags are due to be collected today.
This is not the first time recycling has caused outrage. A woman in Somerset was denied entry into a tip

New York City officials were slammed in April when it was claimed that their overflowing recycling bins were creating a “health hazard”.
And in Somerset, a woman became embroiled in a stand-off with police after they refused her entry into a recycling tip where she was trying to dump her post-Christmas waste.
Source: http://www.express.co.uk/news/world/632707/mountains-rubbish-left-streets-binmen-fail-show-up?utm_source=currently&utm_medium=browser-extension&utm_campaign=chrome&