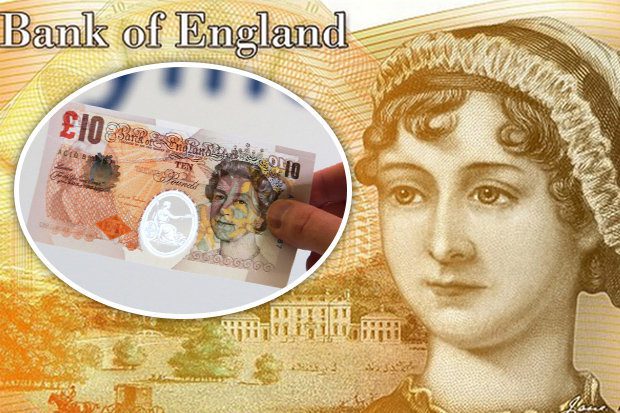 On 18 July 2017 – the 200th anniversary of Jane Austen’s death – the new, plastic £10 note was formally unveiled.
Jane Austen died in Winchester in 1817 and is buried in the north aisle of the Cathedral. The new note “will recognise her universal appeal and enduring contribution to English literature”, Winchester Cathedral said in a statement concerning the launch.
https://youtu.be/ozxlbcyJvrQ
Production of the new £10 polymer note began last August and the Bank Of England has already printed more than 275 million notes, but they’re will go into circulation on Thursday September 14th.
“There can be no better place to unveil the new £10 banknote, featuring Jane Austen, and there can be no better time than today, the 200th anniversary of her death,” Bank of England governor Mark Carney said at the launch.

WHAT YOU NEED TO KNOW ABOUT THE NEW £10 NOTE