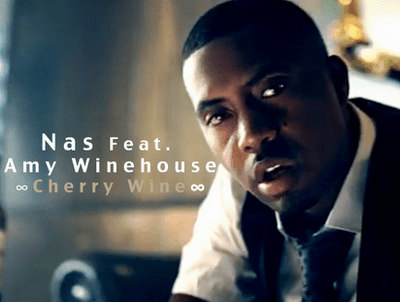 The music video for Nas‘ “Cherry Wine,” a “Life is Good” highlight featuring a hook from the late Amy Winehouse, premiered on VEVO on Tuesday (Oct. 2). The posthumous track is the second duet for the duo, following the release of “Like Smoke” on Winehouse’s own posthumous album “Lioness: Hidden Treasures” last year.
In the Jay Martin-directed video, haunting projections of the late soulstress performing the track appear on the brick wall of a dimly lit bar room. An Amy look a-like does her best stand-in impression, as Nas’ smooth rhymes run the soulful arrangement.
The video premiere precedes the release of Winehouse’s own posthumous box-set “Amy Winehouse At The BBC” on November 12. It will include performances from “Live At Jools Holland,” tracks from T In The Park and the documentary “Amy Winehouse – The Day She Came To Dingle.”
Meanwhile, Nas’ critically acclaimed “Life Is Good” has sold 301,000 copies since its July release, according to Nielsen SoundScan. The MC will perform this Saturday at the Virgin Mobile FreeFest in Baltimore.
www.billboard.com