Muslim MP Naz Shah To Donald Trump:, in Surah [Chapter] 41 verse 34 it teaches that goodness is better than evil. 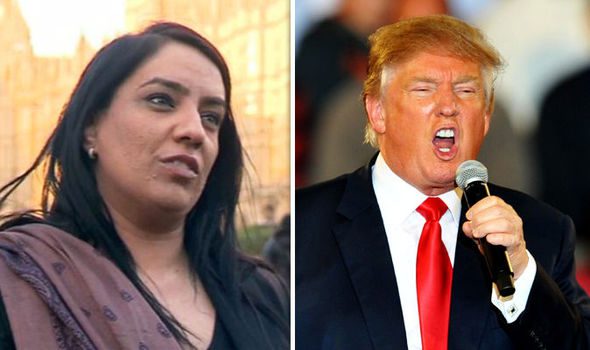 A MUSLIM MP quoted the Koran in a debate about Donald Trump – and invited the outspoken presidential candidate for a curry.

Labour’s Naz Shah branded the White House hopeful a “demagogue” as MPs discussed whether to ban him from Britain.
She also invited him to a meal in her constituency, Bradford West, in a bid to “challenge” his controversial on Islam.
The billionaire sparked fury when he called for every Muslim to be barred from entering the US last month.
In a three-hour debate about the billionaire, Ms Shah said: “I stand here as a proud British Muslim woman. Donald Trump would like me banned from America.”
But she handed Mr Trump an “open invitation” to enjoy a curry in Bradford, the “curry capital of Britain”.
She also offered to visit synagogues, churches and mosques in her constituency, a Labour safe seat, with the Republican candidate.
Ms Shah added: “In my Islam and the ground I understand, in Surah [Chapter] 41 and verse 34 it teaches that goodness is better than evil.
“If someone does bad, you do good in return. I will not allow the rhetoric of badness into my life, into my heart, or that of my constituents.
“What I will do is challenge that with goodness because hatred breeds hate – and that is not something that I will tolerate.”
Yesterday’s debate was called after more than 570,000 people signed a petition entitled “Block Donald J Trump from UK entry”.
No vote was held at the end of the debate, but many MPs said attempts to ban him go against British traditions of freedom of speech.
Conservative Sir Edward Leigh warned against “shutting down an honest debate about immigration”.
And Labour’s Paul Flynn insisted attacking Mr Trump could “fix on him a halo of victimhood” and boost the cause of his supporters.
Read on:
http://www.express.co.uk/news/politics/635971/Naz-Shah-Donald-Trump-Labour-Muslim-Islam-Parliament-politics?&utm_source=currently&utm_medium=browser-extension&utm_campaign=chrome