Migrants In France Sewed Their Lips Together In Protest Of Their Treatment In The Calais Jungle Camp. 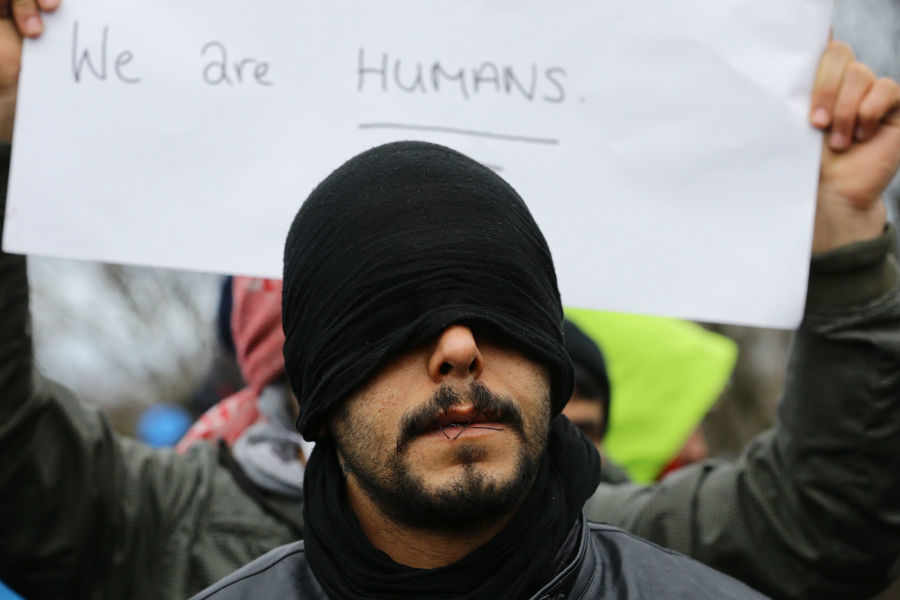 London Mayor Boris Johnson, who is pro-Brexit, called on voters to “ignore scaremongers” before they go to the polls on June 23 for an In/Out European Union (EU) referendum.
Mr Macron’s comments come as French President Francois Hollande prepares to meet with Prime Minister David Cameron for migration and security talks in France.
The French finance minister said if the vote went in favour of leaving the EU it could finish off the agreement between the two countries which allows Britain to conduct border controls on the French side of the Channel.
About 4,000 migrants are currently in Calais, living in the notorious Jungle camp, as they make nightly bids to cross into the UK.
Mr Macron told the Financial Times today: “The day this relationship unravels, migrants will no longer be in Calais.”
He added France would roll out a “red carpet” to London’s bankers if Britain voted to leave the EU.
He said any country leaving the single market would “not be able to secure the same terms” and the EU’s “collective energy would be spent on unwinding existing links not re-creating new ones”.
Mr Cameron, who is campaigning to remain in the EU, has previously been accused of “scaremongering” by claiming the migrant camps which have popped up along the northern French coast could move to England if Britain left the EU.
Clashes between migrants, French police and British anarchists have ensued since Sunday when French demolition teams moved in to dismantle the Jungle camp in Calais.
Today’s meeting is the first UK-France summit since last November’s terrorist attacks in Paris which left 130 dead.
Read on: http://www.express.co.uk/news/world/649416/France-migrants-Channel-Britain-leaves-EU?utm_source=currently&utm_medium=browser-extension&utm_campaign=chrome&