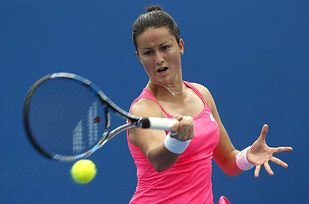 Online betting on a tennis mixed doubles match at the Australian Open was suspended Sunday by a major gambling website after suspicious activity suggested the game might have been fixed, the New York Times reported.

The potentially fixed match on Sunday came just days after a BuzzFeed News and BBC investigation showed evidence suggesting match fixing has run rampant in the sport for years with little action on the part of tennis officials.
Pinnacle Sports, one of the world’s largest online gaming sites, told the Timesunusually large amounts of money poured in for the Melbourne match, featuring little known players Andrea Hlavackova and Lukasz Kubot against Spain’s Lara Arruabarrena and David Marrero.
Hlavackova and Kubot won the match, 6-0, 6-3, with the first set lasting only 20 minutes.
The head of Pinnacle Sports, Marco Blume, told the Times that the match should have been an obscure contest with little money wagered.
Instead, he said money poured in, mostly for Hlavackova and Kubot — an indication the match was rigged and prompting Pinnacle Sports to suspend betting.
“We saw a small number of people placing a large amount of money,” Blume said.
Odds comparison site Odds Portal showed the odds for the match fluctuating before Pinnacle suspended its betting.
The website’s chief said police were informed of the matter.
On the Australian Open’s YouTube channel, highlights of the match were posted.
“Andrea Hlavackova and Lukasz Kubot defeated Lara Arruabarrena and David Marrero without too much trouble in their first match,” the video description read.
Marrero blamed the loss on his knee, the Times reported.
Source: http://www.buzzfeed.com/claudiakoerner/report-match-fixing-suspected-at-australian-open-tennis-matc?utm_source=currently&utm_medium=browser-extension&utm_campaign=chrome#.mjqPX6O7X4