Local Councils Have Been Given Powers To Issue Fixed Penalty Notices For Fly-Tipping. 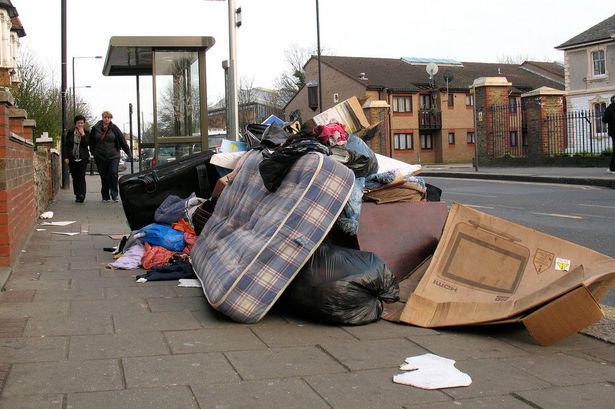 Councils have been given new powers to tackle Britain’s growing fly-tipping problem.

From this month, fixed penalty notices can be issued for small-scale offences such as dumping pieces of broken furniture, old televisions or mattresses.
Unsightly and anti-social, fly-tipping has become a menace to local councils and their budgets – and the Local Government Association is hopeful the new rules will help address the problem.
Councillor Martin Tett said: “Not only does fly-tipping create an eyesore for residents, it is also a serious public health risk, creating pollution and attracting rats and other vermin.”
Sky News followed Daniel and Liam, who work as neighbourhood safety officers, as they rooted through rubbish in an attempt to find the person who dumped bin bags in the road.
Soon enough, they found post with a name and address – allowing them to track the potential offender and issue a fine of anywhere between £150 and £400.
Government figures suggest councils are dealing with around 900,000 fly-tipping incidents annually, an increase of almost 6% between 2013/14 and 2014/15.
It is also expensive to clean up, costing nearly £50m in England alone.
“That’s all taxpayers’ money,” says Stuart Collins, a councillor for Croydon in south London.
“That could all be spent on more worthwhile things like schools and local services that people depend on.
“Our streets aren’t refuse sites, it’s all about people acting responsibly and if they acted responsibly we could use that money in a better way.”
Critics will ask whether the new powers go far enough, and may call for tougher penalties.
But the LGA says it is a step in the right direction, as the fines are likely to discourage minor offences.
To tackle big-scale dumping, often caused by an underground business of rubbish collection, a more aggressive clean-up may be needed.
Source: http://news.sky.com/story/1691869/new-on-the-spot-fines-for-fly-tipping-offences