LIBERIA: Former Warlord Prince Johnson: “I Don’t See Why I Should Be Kingmaker And Not King”! 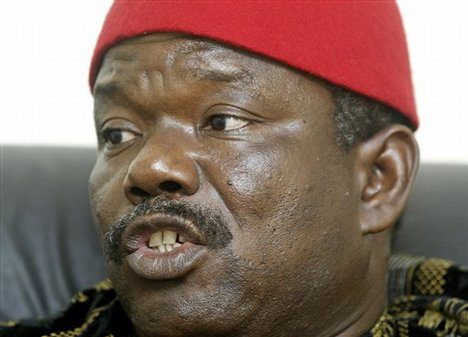 At midnight on Sunday, as Liberia prepared to vote for the successor to Africa’s first female president, a rebel warlord arrived at his Monrovia residence, where a pair of menacing cement lions greeted him.
Prince Johnson, the former rebel leader who ordered the murder of President Samuel Doe in 1990 – and filmed himself drinking beer as he watched Doe’s ear being chopped off – had just wrapped up his presidential campaign in his countryside strongholds in north-east Nimba.
In the last poll in 2011, he played kingmaker, pledging his support to President Ellen Johnson Sirleaf when the election went to a run-off. 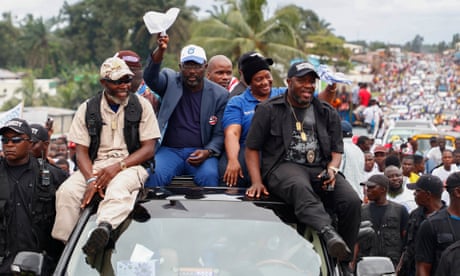 Not all the protagonists of Liberia’s bloody civil war are still around – the most notorious of them, Charles Taylor, is at HM Prison Frankland in County Durham, UK. But some are, capitalising on their activities during the war or denying them – or both

History and tradition play their part in Tuesday’s election, even though 20% of voters are between 18 and 24, and are too young to remember the war. In a poll that will almost certainly go to a run-off, political alliances and endorsements will make all the difference – and these are often determined by the past.
One of the side-effects of this is that, despite Sirleaf’s 12 years in power, all but one of the 20 presidential candidates are male.
“Men have ruled for 158 of this country’s 170 years,” said that one candidate, MacDella Cooper. “The country has got accustomed to male leadership.”
Among the other candidates, Johnson claims that the former Liberian football star George Weah offered him an alliance.
“Prince Johnson makes the people of Nimba believe that this country can still go back to war and he will be the one to save them if it does,” said the political analyst Ibrahim Al-bakri Nyei.
But all sides are using these tactics, he said.
“Disaffected by government policies, people continue to believe the economic situation under Charles Taylor was not as bad as it is now. Jewel Howard-Taylor taps into the frustration of people, making them believe Charles Taylor was a liberator.”
Johnson does not see his past as a problem.
“Liberians are naturally forgiving people,” he said. “You see, the civil war originally took place between the tribe of Samuel Doe and my tribe, but we all have reconciled. They have no reason not to forgive. They have every reason to forgive – because they started the problem.”

This is the first election that Liberia is managing itself, without the help of the UN.

“I’m beat,” sighed the Liberian police commissioner, Gregory Coleman, as he slumped onto his black leather sofa in police headquarters the night before the election. “We are in the driver’s seat and the UN’s in the back watching,”
“People got used over the years to seeing the police as a weapon of the government and not as a tool of the state – to be used against them … We are prepared to do it this time and do it right – non-partisan, neutral accessible to all.”
In a broadcast to the nation on Monday night, Sirleaf urged people to vote peacefully. “For the first time in three generations we will be transferring presidential authority democratically and peacefully from one elected leader to another,” she said.
“We all must respect the outcome of the election as declared by the National Elections Commission … The world will be watching, let’s make them and make ourselves proud.”
As they have done since the war, women camped out by the side of one of Monrovia’s busiest roads on Monday, praying for peace.
Further on, police practiced their riot operations in case the election turns violent, diverting honking traffic.
Read on: https://www.theguardian.com/world/2017/oct/10/liberia-general-election-ellen-johnson-sirleaf-prince-johnson