Leytonstone terror attack: Hero victim tells of how he “went back to have another go” The hero victim of a knife-wielding terror suspect has told how he was slashed in the neck as he confronted the fanatic – and then “went back to have another go”.

David Pethers, 33, was cut as he tried to approach the “crazy” assailant who had just stabbed another man and left him in a pool of blood.
But the lift engineer still tried to disarm the man before police arrived and Tasered him.
Security was stepped up at Tube and train stations with extra officers on patrol following Britain’s first terror attack since the murder of Lee Rigby in 2013.
Police are examining whether the suspect, a 29-year-old man, may have a history of mental health problems.

He stormed into Leytonstone Tube Station around 7pm on Saturday and began attacking travellers as he screamed “this is for Syria”. 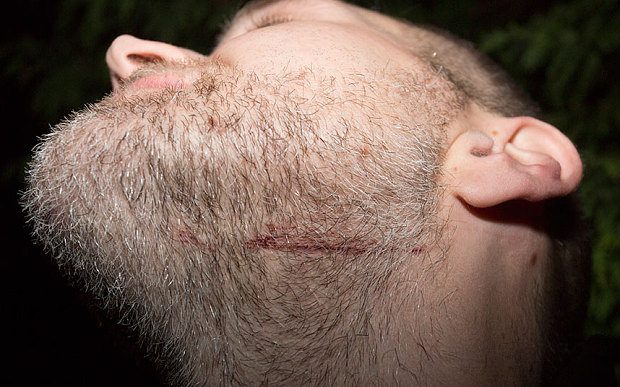 Dramatic footage of the attack flooded the internet after a number of people filmed it on their mobile phones.
In one video a man can be heard shouting “you ain’t no Muslim, bruv” and the phrase was trending on Twitter on Sunday as Londoners sent a defiant message to terrorists.
#YouAintNoMuslimBruv: A ‘very London’ response to Leytonstone Tube terror attack
Sources believe the man was a lone wolf who may have been inspired to act following Britain’s decision last week to bomb Isil in Syria as well as Iraq.
There was no immediate evidence to suggest he had previously been on the radar of the intelligence and security agencies.

Commuters, including young children were left terrified as the man struck in a busy early evening tube station.

Witnesses told how as he entered the ticket hall he attacked a 56-year-old man carrying a guitar and beat him unconscious.
Link to full Story: http://www.telegraph.co.uk/news/uknews/terrorism-in-the-uk/12035552/Leytonstone-London-tube-underground-machete-attack-terrorism.html
**********************WE GOT IT COVERED********************
Continue to like, comment and follow MicstagesUK, for the latest: Gossip, Music News, Entertainment News, Fashion and Current Affairs
Facebook: Micstages UK  Twitter: @MicstagesUK  Gmail: MicstagesUK