Khalid And Ibrahim El Bakraoui Were Listed As Potential Terror Threat To U.S., Prior To Tuesday Morning’s Blasts. 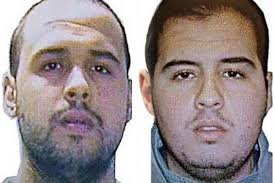 #WeGotYourBack #WeGotItCovered #BreakingNews #NBCNews #BrusselsTerrorAttacks #SuspectsKnown #CounterTerrorismAuthorities #ElBakraouiBrothers
The two brothers named as the suicide bombers at the center of the Brussels airport and metro attacks this week were listed as a potential terror threat in U.S. databases, NBC News has learned.
The officials would not say on which of the many U.S. terrorism databases the brothers were listed. But the disclosure does raise questions about how Belgian authorities could describe them as petty criminals who were not on their counter-terrorism radar.

Molebeek Mayor Says Everyone Is Concerned 2:24

Congressional committees have asked U.S. intelligence agencies for an accounting of which lists the Brussels attackers were on, for how long, and whether and how the information was shared, U.S. officials told NBC News.
Belgian authorities identified Ibrahim El Bakraoui as one of the suicide bombers who attacked the airport, and his brother Khalid as the suicide bomber on the Brussels subway. The attacks killed at least 31 people and injured hundreds.ou
Source: http://www.nbcnews.com/storyline/brussels-attacks/u-s-knew-brussels-bombers-they-struck-n545051