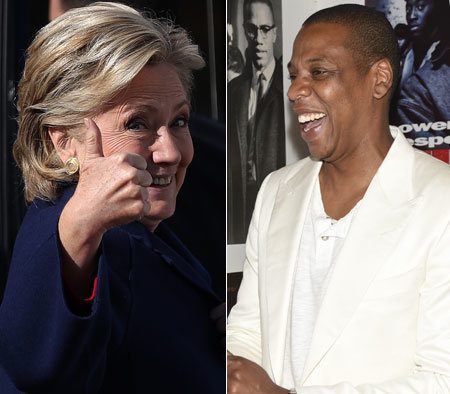 “Jay Z will be joined at the concert by special guests to encourage unity and urge Ohioans to support Clinton by voting early or on Election Day,” Clinton’s campaign said in a statement.
Tickets are available on a first come, first served basis starting Friday (October 28). Sign up here to receive ticket information.
The Democratic presidential candidate said today (October 26) in an interview with The Breakfast Club she was “thrilled” at having Hov’s support and that of so many different people.
Election Day is November 8 where Clinton faces off against Republican hopeful Donald Trump.
(This article was first published October 24, 2016 and is as follows.)
Jay Z is scheduled to perform a concert in Cleveland, Ohio in support of Democratic presidential nominee Hillary Clinton, which is set to happen sometime before the November 8 election day, according to Buzzfeed.
The goal of the event is reportedly to curry the support of young black voters in a state where President Barack Obama squeezed out Democratic victories in 2008 and 2012 after Republican wins in 2000 and 2004. In this election, Clinton is running against GOP candidate Donald Trump. No president has ever won an election without scoring the swing state of Ohio.
Hov has a history of supporting the Democratic party. In 2012, the Hip Hop mogul and Bruce Springsteen headlined a similar concert in Columbus alongside President Obama the night before his reelection.
The Clintons and The Carters have seemingly become closer recently. This spring, the former Secretary of State had high praise for Beyonce’s LEMONADE album. Last month, former president Bill Clinton was in attendance at Hov’s Made in America Music Festival in Philadelphia and shared a few laughs with Mr. and Mrs. Carter backstage as Beyonce celebrated her 35th birthday.
Source: http://hiphopdx.com/news/id.40992/title.jay-z-is-backing-hillary-clinton-with-ohio-concert