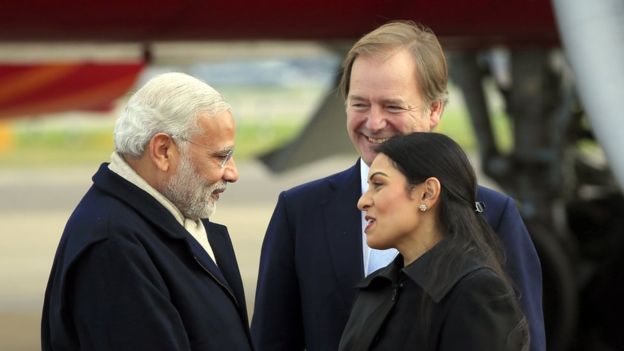 India’s Prime Minister Narendra Modi has arrived in the UK for a three-day visit as a guest of his British counterpart, David Cameron,  BBC News reports.

The first day of the visit will be marked by a Red Arrows flypast before Mr Modi makes a speech to Parliament.
Also during the trip, he will meet the Queen, visit a statue of Mahatma Gandhi and address crowds at Wembley Stadium.
Mr Cameron said the visit marked “a historic opportunity” for Britain and India to help each other prosper.
“It’s an opportunity for two countries, tied by history, people and values, to work together to overcome the biggest challenges of our age,” Mr Cameron said.
“Prime Minister Modi and I intend to grab that opportunity with both hands.”


Mr Modi said the aim of the visit was to strengthen “co-operation with a traditional friend”.
On arrival, he tweeted: “Reached London. India-UK ties will receive a great impetus. Will attend a wide range of programmes in UK.”
BBC News correspondent Christian Fraser said India’s growing economy was “crucially important to British industry and trade”.
“We’re told that around £10bn worth of trade deals will be signed over the course of the next two days,” he added.

The visit comes at an unsettled time in India, where Mr Modi’s Hindu-nationalist party lost a recent regional election.
The Bharatiya Janata Party (BJP) suffered the defeat in the northern Indian state of Bihar, amid concerns over a rise in religious intolerance in India.
His supporters will hope his visit will help him spring back from that defeat.
Link to full story: http://www.bbc.co.uk/news/uk-34790212
****Continue to follow us for the latest Gossip, Fashion, Music and Current Affairs****
Facebook: MicstagesUK I Twitter: MicstagesUK I Google+: MicstagesUK