Greece Migrant Crisis Summit: NATO Ships To Be Deployed To Rescue And Return Migrants Back To Turkey 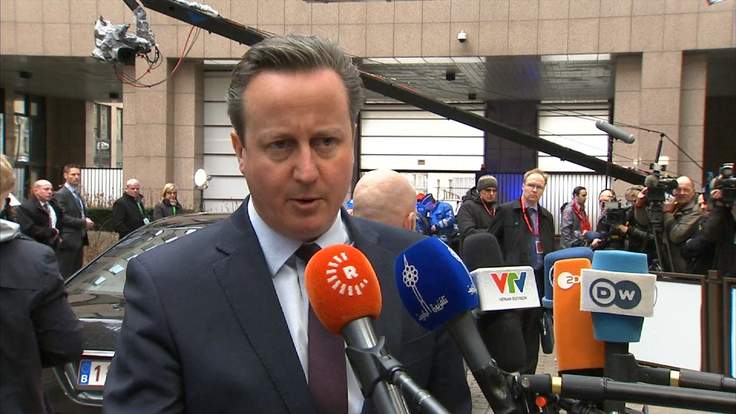 #WeGotYourBack #WeGotItCovered #BreakingNews #SkyNews #DavidCameron #Brussels #EULeadersSummit #MigrantCrisis #NATOShips
David Cameron is to push EU leaders at a migration crisis summit to make sure refugees crossing to Europe are sent back to Turkey.

David Cameron is in Brussels as EU leaders gather for an emergency summit to discuss the growing migrant crisis.

Speaking as he arrived, Mr Cameron said the crisis was “the greatest challenge facing Europe today”.
He made reference to the EU referendum, saying: “Even outside the EU we’d be affected by a migration crisis like this.”
The UK has announced it is sending a Royal Navy ship to help patrol the Aegean Sea between Greece and Turkey to help tackle the people-smuggling gangs trafficking thousands of migrants into Europe.
Speaking to Sky News, the Defence Secretary Michael Fallon said the Royal Fleet Auxiliary vessel Mounts Bay would be tasked with uncovering and disrupting the gangs trading in “human misery”.

The NATO mission is not mandated to turn migrants back but is, under international law, obliged to rescue any migrants on vessels in distress.
“There are thousands attempting this crossing now. The Turkish and indeed the Greek authorities are getting overwhelmed and I think it is right that NATO should bring its ships to come to help to try and save lives where they can,” Mr Fallon said.
Crucially, the NATO ships will be instructed to send migrants back to Turkey and not take them onwards to Greece.
This, leaders hope, will prevent the presence of the NATO ships acting as a magnet – migrants will not be encouraged to take the journey in the belief that a NATO ship will rescue them and take them to Europe.
“People will go on attempting this very dangerous sea crossing if they don’t believe they are going to be sent back again and that is what the Prime Minister will be pressing our European partners to get agreed in Brussels today,” Mr Fallon said.

NATO has yet to explain how a maritime mission can successfully counter trafficking gangs who rarely take to the waters, choosing instead to stay in Turkey and offer migrants discounts if they pilot the boats.
The EU meeting, which includes the Turkish Prime Minister Ahmet Davutoglu, is yet another convened to find solutions to the growing emergency.
:: Refugees ‘Beaten’ By Macedonian Border Guards
The latest figures reveal that more than 125,000 migrants and refugees have arrived in Europe so far this year. It is estimated around 2,000 are crossing into Greece each day.
It is understood that all 28 EU leaders will agree that member states must use “all available means” to stem the flow of people into the EU, but it’s not yet clear quite what that means.

A draft of the summit’s conclusions, leaked last night, suggested that the leaders will conclude formally that the so-called Balkan corridor, the route migrants have been taking from Greece through the Balkans to Western Europe, is now closed.
That would represent an EU-level acknowledgment of a situation that has been a fact on the ground for two weeks.
However, reports in the German media indicate that the German government is unhappy about such a declaration, possibly because of the growing humanitarian problem the closed route is causing.
The Greek government has said that 36,000 people are currently trapped in Greece following a unilateral decision by Macedonia to close its border.
Source: http://news.sky.com/story/1654718/pm-push-for-migrants-to-be-sent-back-to-turkey