George Osborne On The UK Budget 2016: “The UK Needs To Live Within Its Means To Withstand Economic Shocks” 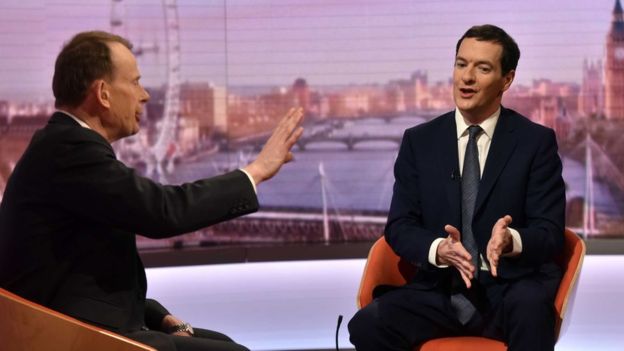 Chancellor George Osborne has warned the UK has to “act now rather than pay later” ahead of next week’s Budget, with further spending cuts planned.

He said the cuts would be “equivalent to 50p in every £100” of public spending by 2020, which was “not a huge amount in the scheme of things”.
He told the BBC’s Andrew Marr Show that the world was “more uncertain” than at any time since the financial crisis.
He said the UK needed to live within its means to withstand economic shocks.
Labour shadow chancellor John McDonnell called for more long-term investment to enable the UK economy to “withstand the global headwinds”.
Mr Osborne warned of cuts to come in his upcoming Budget on 16 March in a BBC interview last month.

Speaking on the Marr Show, Mr Osborne said the world was now “a more difficult and dangerous place” and warned about the state of the global economy.
While Britain was better placed to cope with economic shocks compared with 2008, it was “not immune to what’s going on”, he said.
“My message in this Budget is that the world is a more uncertain place than at any time since the financial crisis and we need to act now so we don’t pay later,” he said.
“That is why I need to find additional savings equivalent to 50p in every £100 the government spends by the end of the decade, because we’ve got to live within our means to stay secure.
“That’s the way we make Britain fit for the future.”

The chancellor – whose Budget on Wednesday will be his eighth – said he thought the savings were achievable, but he would not be drawn on where the axe would fall.
He said the government’s plan had enabled it to invest in “the public’s priorities”, such as the NHS, science and education, infrastructure and defence, “while at the same time not spending more than the country can afford”.
Mr Osborne added that he wanted to boost productivity, improve Britain’s schools and infrastructure and make taxes “more competitive”.
The chancellor declined to be drawn on whether fuel duty would be increased – something Tory backbenchers are urging him against.

But he added: “On fuel duty, we had a manifesto commitment there and we have pencilled in fuel duty plans going forward but what I would say is, every time we can have our economy more competitive, we do.”
Mr Osborne also rejected claims that the most vulnerable people would be hit in the Budget through cuts to disability benefits known as Personal Independence Payments (PIP).
He said the government was “increasing spending on disabled people”, but added that it was right to make sure the system was being “properly managed”.
Also on Marr, Labour’s shadow chancellor John McDonnell called for more long-term investment in the UK economy, specifically in skills, infrastructure and new technology.
He said the chancellor had reduced investment to 1.4% of GDP which was “unacceptable”, saying the OECD has said the figure should be at least 3%.
“What I want to do is to make sure we invest in the long term and then we can withstand the global headwinds,” he added.
He said prosperity needed to be “shared by all”, saying the government’s economic policies had created an “unequal” society.

The chancellor has promised to get the books into surplus by 2020.
In his November Autumn Statement, he watered down planned £4.4bn cuts to tax credits and eased back on planned spending cuts to the Home Office and other departments. He was able to do this owing to a combination of better tax receipts and lower interest payments on debt.
BBC political correspondent Eleanor Garnier said: “Only four months ago, when he made the Autumn Statement, Mr Osborne had sounded upbeat about the country’s finances.
“But now, with the size of the British economy much smaller than had been expected, it seems the chancellor has not left himself much wriggle room.”
In his Marr interview, Mr Osborne also warned against the UK leaving the EU, saying it “would create an economic shock” that would “cost jobs” and “damage living standards”.
Leave campaigners say the UK could strike favourable trade deals with the EU after exit, arguing that Britain’s future if better off outside.
Meanwhile, Mr McDonnell said he and the Labour shadow cabinet would be “on the stomp” campaigning for a remain vote amid criticism Labour has been quiet in the campaign.
Read on: http://www.bbc.co.uk/news/uk-politics-35796861