From September 2016, GCSE Pupils Will Be Taught That Africans were Our Nation’s Earliest Inhabitants Who Arrived Here Long Before The English. 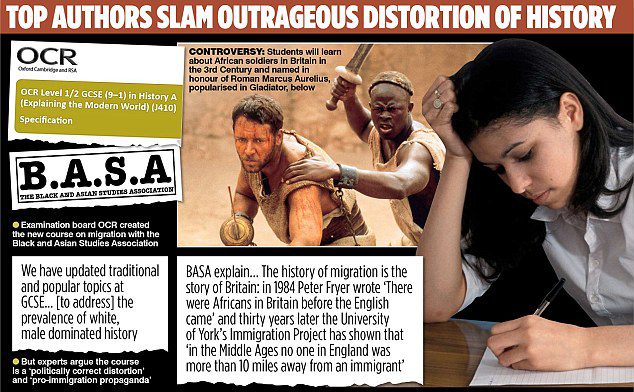 The Mail on Sunday has discovered that the extraordinary re-writing of our island’s history – the politically correct work of a Marxist academic – will be offered to thousands of history students throughout England from September.

Its creators claim the course addresses the ‘white male-dominated’ view of history – but it has outraged some of Britain’s most eminent thinkers.

Booker and Nobel prize-winning novelist V.S. Naipaul said: ‘Once again political correctness is distorting our history and the education of our children.’

And historian Sir Roy Strong, author of The Story Of Britain, said: ‘This stands history on its head, projecting back on to the past something that isn’t true.’

Offered by the Oxford and Cambridge examination board (OCR) and approved for use in schools, the course literature states: ‘This course will enable students to learn how the movement of people – European, African, Asian – to and from these islands has shaped the story of this nation for thousands of years.

‘The history of migration is the story of Britain: in 1984, Peter Fryer wrote, “There were Africans in Britain before the English came.” ’

The course – Migration To Britain c. 1,000 to c. 2010 – was created with academics from the Black and Asian Studies Association but has been condemned as ‘pro-immigration propaganda’ at a time when the subject is especially sensitive.

Last night, eminent military historian and author Antony Beevor said: ‘Migration is a very valid area to study, but if it’s a question of rewriting history to bolster the morale of certain sections of the population, rather than a scrupulous attitude towards facts, then that is a total distortion and it’s outrageous.’

It’s projecting back on to the past something that isn’t true SIR ROY STRONG, HISTORIAN

Sir Roy Strong said: ‘The only Africans who came here were a few with the Romans who came and then left! I find it disturbing that our children should be taught something that is clearly designed to feed into contemporary problems rather than tell our island’s story properly.’

V. S. Naipaul added: ‘This absurd supposition of Africans inhabiting Britain before the English only goes to show how our once esteemed centres of learning, Oxford and Cambridge, have been insidiously eroded by a dangerous dogma that, very like IS today, wrought misery and havoc in Russia, China and the Eastern bloc, where for all practical purposes it has failed.’

Although the new course takes its starting point as the Middle Ages, one section is headed ‘Population diversity in England before 1066’.