EU Migrant Crisis Deal Backfires As Half As Many Migrants Sent To Turkey Are Brought Back To Greece By The Coastguard. 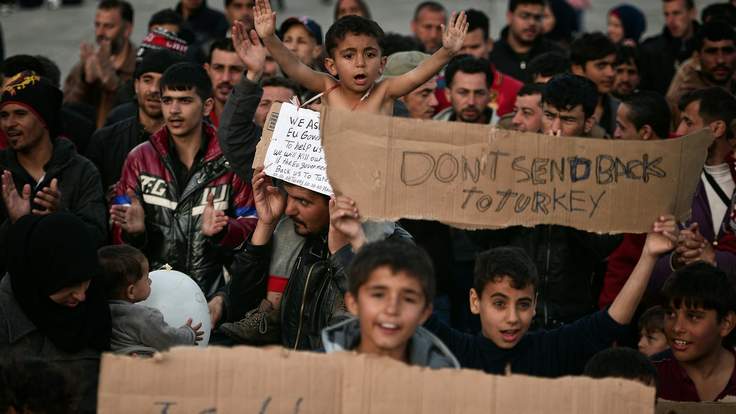 The first boat carrying migrants from Greece has arrived in Turkey as part of an EU deal to deport those who have failed to gain asylum.

Ships carrying around 200 migrants and refugees – more than 130 from Lesbos and over 60 from Chios –  set off across the Aegean Sea from the islands on Monday.
The first boat with several dozen passengers on board arrived at Dikili on the Turkish coast at around 9.20am (local time), accompanied by two Turkish coastguard vessels and a police helicopter.

The first ferry with migrants docks in Dikili, Turkey

They were taken to a small white tent on the quayside, behind security fencing, where they were met by immigration officials as they disembarked.
“All of the migrants returned are from Pakistan except for two migrants from Syria who returned voluntarily,” Giorgos Kyritsis, a spokesman for a government refugee crisis committee, told state television.

He said there was “no timetable” for further deportations, adding the examination of asylum applications “will take some time”.
Sky’s Michelle Clifford in Lesbos said: “The whole idea about this scheme is to deter people from making that dangerous sea crossing from Turkey here to Greece.
“But as those ferries left here we filmed 58 migrants being brought to shore by the coastguard – so half as many almost as were taken away to Turkey – arrived from Turkey. Clearly the message they will be sent back is not deterring people at the moment.”
Clifford earlier spoke to charity workers from Save The Children who have been talking to migrants, mainly Syrians, at a detention centre on the Greek island.
“They told us women and children there were sleeping in the outdoors, and some of them we were told disturbingly had said that they would commit suicide, they would jump overboard, if they were sent back to Turkey because they couldn’t bear the thought potentially of being sent back to Syria,” she said.

As each migrant was led aboard a ship, a small group of protesters outside the port in Lesbos shouted “shame on you!”
Riot police officers also boarded the boats.
Europe’s leaders are hoping the controversial plan of collective deportations from Greece will alleviate the migrant crisis affecting the continent.
Journalist Andrew Connelly, on Lesbos, told Sky News: “We think that there should be around 250 taken to Turkey today and possibly by the end of the week another 750.
“What we hear from my contacts in the detention centres is that we didn’t see violent scenes of refugees being forced by police to get on the buses. There is no way of knowing how the situation may escalate.”
Turkish Interior Minister Efkan Ala said they had made provision to receive 500 people on the first day, but the Greeks had only provided the names of 400.
In Dikili in Izmir Province, contractors were quickly converting the port into a makeshift readmission centre.
Although the first migrants to be sent back are expected to be from Pakistan, Afghanistan, Iraq and Iran, Syrians who have illegally crossed will also be expelled under the deal if they have arrived since 20 March.
Europe’s politicians are hoping the mass expulsions will act as a deterrent and discourage migrants from boarding the smugglers boats, but already there are signs it is not working.
The deal will of course fail if large numbers of people continue to make the crossing.

Confusion Over EU Deal In Camp

In Dikili, migrants are still arriving hoping to connect with the smugglers and get to Europe.
Human rights groups argue the collective deportations break international law and mark a dark time in Europe’s history.
Read on: http://news.sky.com/story/1672084/greece-begins-sending-migrants-back-to-turkey