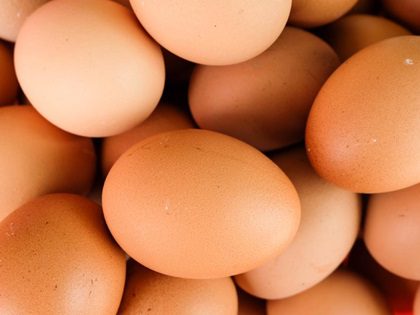 Around 700,000 eggs from Dutch farms linked to a contamination scare have been sent to the UK – far more than the 21,000 first estimated.

The Food Standards Agency (FSA) said products affected in the UK were likely to be processed foods that contained eggs among other ingredients.
Several products, including salads, sold at Sainbury’s, Morrisons, Waitrose and Asda have been withdrawn.
:: List of the products being withdrawn
The FSA said investigations indicated it was “very unlikely” that the eggs posed a risk to public health.
Some of the products containing the eggs had a short shelf life and will have already been consumed, the FSA said.
However, other foods were still within the expiry date and are now being withdrawn from sale.
The eggs come from farms implicated in the use of the insecticide Fipronil, used in veterinary products to treat ticks and fleas.
The World Health Organisation considers the insecticide to be “moderately hazardous” and says it can have dangerous effects on the the liver, kidneys and thyroid glands.
The news comes as investigators carried out coordinated raids linked to the Fipronil probe in Belgium and the Netherlands.
Dutch authorities on Thursday arrested two men as part of their investigation into the tainted eggs.
A day earlier Belgium accused the Netherlands of knowing about the potential problems and failing to sound the alarm.
But Belgian officials have also admitted they were notified of a problem and failed to trigger the EU’s international food safety alert system.
A Dutch farming organisation has said that several million hens may need to be culled across 150 companies in the country, and that 300,000 have already been killed.
In Germany and Holland, supermarkets Aldi and Lidl have already taken millions of eggs off their shelves, in what Aldi said was a “purely precautionary” measure.
Britain produces 85% of the eggs it consumes, but imports approximately two billion each year.
The British Egg Industry Council said consumers concerned about the safety of their food should look for British Lion eggs.
“Shell eggs on sale to consumers are not affected and the FSA says that there is no need for people to change the way they consume or cook eggs,” it said.
“All major UK retailers stock British Lion shell eggs and tests have shown that there is no risk from British eggs.”