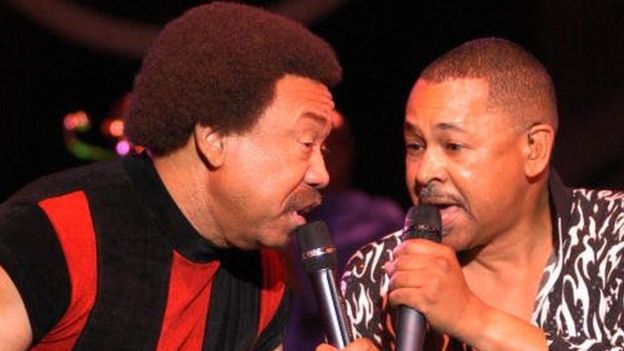 White, 74, died in his sleep in Los Angeles on Thursday morning. He suffered from Parkinson’s Disease.

His band had a series of hits including September, Boogie Wonderland, Shining Star and After the Love has Gone.
The singer-songwriter was diagnosed with Parkinson’s in 1992 but his condition was reported to have got worse in recent months.
Earth, Wind & Fire were inducted into the Rock and Roll Hall of Fame in 2000, and Maurice was individually inducted into the Songwriters Hall of Fame in 2010.
How Maurice White made Earth Wind & Fire a force for positivity

Popularly known by his nickname of Reese, he worked with various well-known recording artists such as The Emotions, Barbra Streisand, Cher and Neil Diamond.
“My brother, hero and best friend Maurice White passed away peacefully last night in his sleep,” Verdine White, also a member of the band, told The Associated Press on Thursday.
“While the world has lost another great musician and legend, our family asks that our privacy is respected as we start what will be a very difficult and life changing transition in our lives. Thank you for your prayers and well wishes.”
The group tweeted: “Our brother Maurice White passed peacefully in his sleep this morning. The light is he, shining on you and me.

Bette Midler was among those to pay tribute to the star on Twitter: “Maurice White, founding member of Earth, Wind and Fire, has died. Great music, energy, great spirit. The Lord must need a band up there.”
“Thank you Maurice White for creating some of the greatest soul funk and R&B music of all time. Gratitude,” wrote Mark Ronson.
Queen Latifah thanked White “for the gift of your music!” and singer and actressJill Scott said: “Your music is the template of spirituality and greatness. Thank you. Be ever wonderful”.
Lenny Kravitz posted a fulsome tribute on Instagram: “King. Genius. Leader. Teacher. Producer. Arranger. Writer. Multi-instrumentalist. Motivator. Mystic. Through his music and artistic expression, he taught me a lifetime’s worth of knowledge. He is at the top of the list of all of the greatest masters. The music he left behind as Earth Wind and Fire, mixed with his messages of love, will live on forever.”
Earth, Wind & Fire have sold more than 90 million albums worldwide. Many of the group’s earlier hits were characterised by Bailey’s bright falsetto voice.
In an interview with the Associated Press news agency in 2000, White said that he wanted Earth, Wind & Fire’s music to inspire people rather than just entertain them.
“That was the whole objective, to try to inspire young people to believe in themselves and to follow through on their ideas,” he said.
“We’ve touched so many people with these songs.”
The band is perhaps best known for its exuberant, horn-driven mix of jazz, funk, gospel and Big Band music played at concerts where they performed in glitzy costumes underneath multi-coloured lights. They played at many top venues including the Super Bowl and the White House.
“We live in a negative society,'” White informed Newsweek at the peak of the band’s success. “Most people can’t see beauty and love. I see our music as medicine.”
In other tributes, Nile Rodgers posted a YouTube video with the tweet: “Back in the day we paid homage to your genius before we were Chic!,” calling White “one of the most amazing innovators of all time”.
“Just heard we lost #MauriceWhite, echoed Beverley Knight. “Gutted although I knew he was ill a long time. Soundtrack of my childhood. Seminal R&B smashers.”
This year’s Oscar host, Chris Rock, tweeted an image of the singer, with the words: “R.I.P the great Maurice White. ‘You can’t hide love’.”
“Your contributions to music will be kept in our hearts and souls foever,” posted Quincy Jones on Twitter, paying tribute to the star.
CeeLo Green wrote: “Rest well master Maurice White. Your work was well done and you earned and deserve eternal peace.”
On the radio, DJs Nick Grimshaw, Christian O’Connell and Lauren Laverne all paid tribute to the singer, with O’Connell renaming his breakfast show Boogie Wonderland.
Source: http://www.bbc.co.uk/news/entertainment-arts-35499149