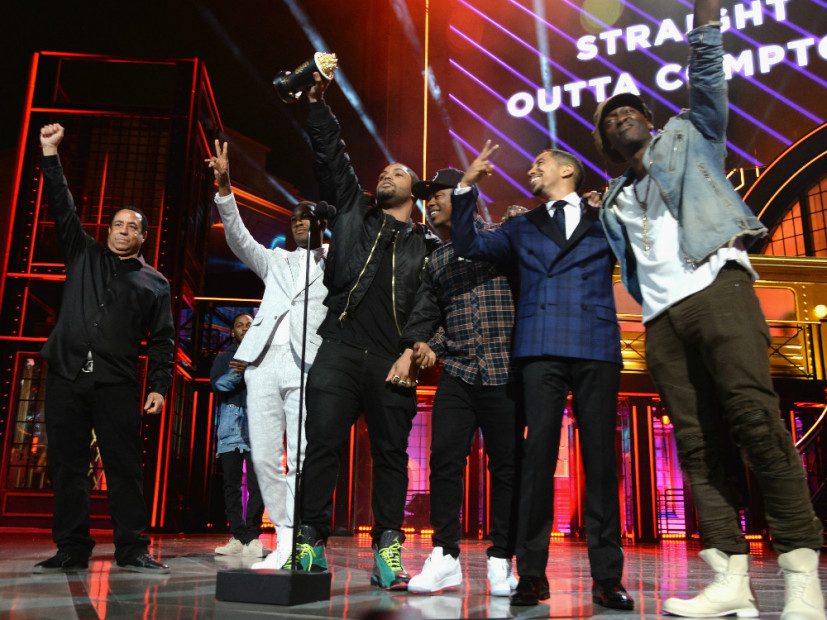 #WeGotYourBack #WeGotItCovered #BreakingNews #HipHopDXNews #EntertainmentNews #Movies #MtvMusicAwards #LosAngeles #USA #StraightOuttaCompton #AcceptanceSpeach #IceCube
LOS ANGELES, CA – While Ice Cube consistently maintained the position that he did not care about Straight Outta Compton‘s recognition by the Oscar Awards, many cried snub when the historic film was only nominated for Original Screenplay.
At the 2016 MTV Movie Awards, which aired yesterday (April 10), the Straight Outta Compton cast mocked the Oscars in the acceptance speech for best True Story.
“I’d just like to take a moment to like thank the Academy,” Jason Mitchell, who portrayed the late Eazy-E in the film, says.
O’Shea Jackson Jr., who played the role of his father, Ice Cube, leans over and whispers in his ear.
“I mean MTV,” Mitchell says. “I’m sorry. I’m sorry. I’m sorry I’m sorry. My bad. My bad. My bad. My bad. My bad.”
After the joke, Jackson takes a moment to reflect on the personal meaning of the film and how the bond between the group’s members serves as example for today’s youth.
“N.W.A, the Straight Outta Compton story is so much beyond music,” he says. “It really speaks to brotherhood. I want everybody in here when you leave here tonight, really look at the people who’s around you. Look at the friends that you surround yourself with because I know the people around me, they support me and they motivate me. If you’re not hanging out with people that motivate you or want you to be a better you, you’re not hanging out with the right people.”
The award was presented by Kendrick Lamar, who introduced the legendary rap group when they were inducted into the Rock and Roll Hall of Fame Friday (April 8).
DJ Yella accepted the award with the actors, including Corey Hawkins who played Dr. Dre,Aldis Hodge who played MC Ren and Neil Brown Jr. who played DJ Yella.
That was the movie’s only win, but Jackson was nominated for Breakthrough Performance and Straight Outta Compton was nominated for Movie of the Year.

Will Smith was honored with the Generation Award at the MTV Movie Awards for his twenty-plus year career in television and movies. His tribute included The Lonely Island performing The Fresh Prince of Bel Air theme song and acknowledgement from Queen Latifah and Halle Berry.
In his speech, Smith jokes about the award being the “old man’s award” and recalls meeting a young fan who only knew who he was because of his son Jaden‘s role in Karate Kid. He then reflects on the purpose of his career.
“I’m humbled,” Smith says, “and I just want all of you to know that I’m dedicated to being a light in this world. There’s a lot of suffering. A lot of people are suffering in this world and when you see my material and when I present myself in public and what I’m trying to build with my family and friends, I just want all of you to know I’m dedicated ’til I die to light and to love.”
To read the entire list of 2016 MTV Movie Award winners, visit MTV.
View the cast of Straight Outta Compton and Will Smith’s acceptance speeches below:
Source: http://hiphopdx.com/news/id.38290/title.straight-outta-compton-cast-mocks-the-oscars-in-mtv-movie-award-acceptance-speech