David Cameron: ‘ I Promise To “Steady The Ship” Over The Coming Months Before Stepping Down In October’ 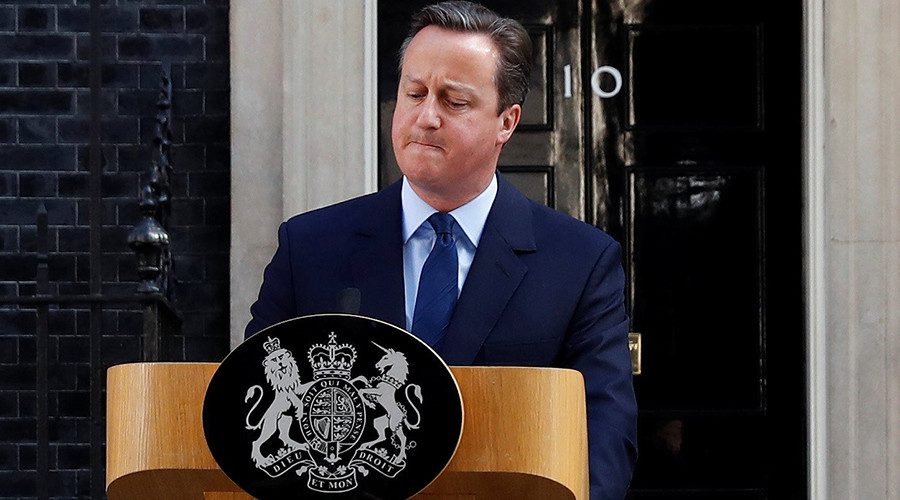 Prime Minister David Cameron is to step down by October after the UK voted to leave the European Union.


Youtube video: Published on Jun 24, 2016:  Brexit: David Cameron resigns as UK votes to leave BBC News
Speaking outside 10 Downing Street, he said he would attempt to “steady the ship” over the coming weeks and months but that “fresh leadership” was needed.
The PM had urged the country to vote Remain but was defeated by 52% to 48% despite London, Scotland and Northern Ireland backing staying in.
UKIP leader Nigel Farage hailed it as the UK’s “independence day”.
The pound fell to its lowest level against the dollar since 1985 as the markets reacted to the results.

“I do not think it would be right for me to be the captain that steers our country to its next destination,” he said in a statement outside Downing Street.
Mr Cameron, flanked by his wife Samantha, said the result was the “will of the British people” which was an “instruction which must be delivered”.
Close to tears and with his voice breaking, Mr Cameron said: “I love this country and I feel honoured to have served it and I will do everything I can in future to help this great country succeed.”

The referendum, called by Mr Cameron, delivered a shock victory for the Leave campaign.
The Brexit vote immediately sent the pound tumbling and sparked calls for his resignation.
Boris Johnson is the early favourite to replace Mr Cameron.
David Camerons full speach

Good morning everyone, the country has just taken part in a giant democratic exercise, perhaps the biggest in our history.
Over 33 million people from England, Scotland, Wales, Northern Ireland and Gibraltar have all had their say.
We should be proud of the fact that in these islands we trust the people for these big decisions.
We not only have a parliamentary democracy, but on questions about the arrangements for how we’ve governed there are times when it is right to ask the people themselves and that is what we have done.
The British people have voted to leave the European Union and their will must be respected.
I want to thank everyone who took part in the campaign on my side of the argument, including all those who put aside party differences to speak in what they believe was the national interest and let me congratulate all those who took part in the Leave campaign for the spirited and passionate case that they made.
The will of the British people is an instruction that must be delivered.
It was not a decision that was taken lightly, not least because so many things were said by so many different organisations about the significance of this decision.
So there can be no doubt about the result.
Across the world people have been watching the choice that Britain has made.
I would reassure those markets and investors that Britain’s economy is fundamentally strong and I would also reassure Britons living in European countries and European citizens living here there will be no immediate changes in your circumstances.
There will be no initial change in the way our people can travel, in the way our goods can move or the way our services can be sold.
We must now prepare for a negotiation with the European Union.
This will need to involve the full engagement of the Scottish, Welsh and Northern Ireland governments to ensure that the interests of all parts of our United Kingdom are protected and advanced.
But above all this will require strong, determined and committed leadership.
I’m very proud and very honoured to have been Prime Minister of this country for six years.
I believe we’ve made great steps, with more people in work than ever before in our history, with reforms to welfare and education, increasing people’s life chances, building a bigger and stronger society, keeping our promises to the poorest people in the world and enabling those who love each other to get married whatever their sexuality, but above all restoring Britain’s economic strength.