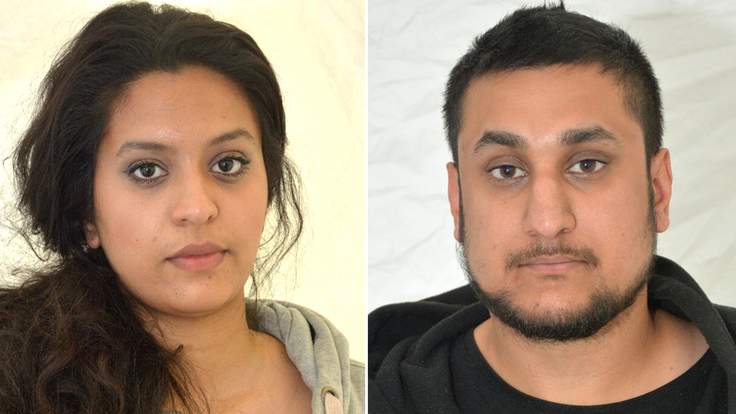 Would-be suicide bomber Mohammed Rehman and his ex-wife Sana Ahmed Khan have been jailed for life after being convicted of planning a terror attack in London.

[youtube https://www.youtube.com/watch?v=YQ_NH0O3htA]
Rehman had stockpiled bombmaking materials at his Reading home and using the Twitter username “Silent Bomber” he asked his followers which targets they thought suitable for a massive terror attack – Westfield shopping centre or the London Underground.
He and Khan were sentenced after an Old Bailey jury unanimously found them both guilty of preparing an act of terrorism in May this year.
Rehman was told he must serve at least 27 years behind bars. Khan was given a minimum term of 25 years. The judge, Mr Justice Baker, said they were a significant danger to the public.
The court heard Rehman had used a profile picture of “Jihadi John” Mohammed Emwazi, when he posted on Twitter: “Westfield shopping centre or London underground? Any advice would be appreciated greatly,” accompanied by a link to an al Qaeda media release about the 7/7 bombings.
Jurors were told that on the same day Rehman searched YouTube for “London bombings” and “Shehzad Tanweer” – one of the 7/7 bombers who he referred to as his “beloved predecessor”.
Prosecutors said Rehman, 25, proved he was “intent on martyrdom” when he also tweeted: “Now I just make explosives in preparation for kuffar lol and when I’ve made the required amount I’ll be wearing them on my chest.”
The judge said the reason for his radicalisation might never be known, but could be linked to disaffection from his family and the wider community.
He told Rehman: “Once you had gained that mindset, you determined to fulfil the Islamic State’s call for Jihad; not like some, by travelling to Syria or elsewhere to take part in the conflict in those areas, but by carrying out an act of terrorism within the United Kingdom.
“The type of act which you envisaged not only encompassed the use of explosive substances which would be used to maximum effect so as to cause multiple injuries and fatalities, but specifically included a suicide bombing, an act which envisaged martyrdom.”
Read More: http://news.sky.com/story/1614320/couple-jailed-over-7-7-anniversary-terror-plot