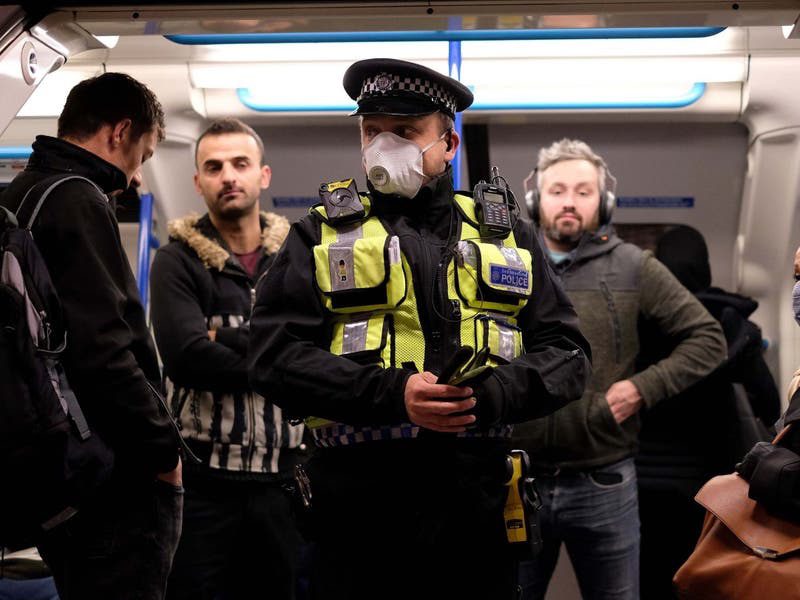 Police will not be able to arrest or fine people for breaking government rules on social distancing or wearing face masks, it has been confirmed.

Guidance issued to all officers in England and Wales by the College of Policing after coronavirus lockdown restrictions were eased on Wednesday said they can only enforce the law.

“Officers should only enforce the Health Protection Regulations,” an official document said.

Government guidance such as “two-metre distancing, avoiding public transport or the wearing of face coverings in enclosed spaces” is “not enforceable”.

The Health Protection Regulations make it illegal to gather publicly in groups of more than two or leave home without “reasonable excuse”, but do not contain restrictions on social distancing or masks.

Martin Hewitt, chair of the National Police Chiefs’ Council, said: “Police still have a role where people are gathering in groups with those not in their household or if they’ve left their house for one of the reasons not designated as a reasonable excuse.

“We will use common sense and discretion to determine what’s reasonable. Officers will engage, explain, encourage and, only as a last resort, enforce.”

The list of reasonable excuses has been expanded in England, and now includes going to recycling centres, spending unlimited time outside and meeting one member of another household in open spaces.

Garden centres and outdoor sports courts can now open, and people can visit estate agents and visit homes for rent or sale.

Asked whether the relaxed restrictions would be more difficult to enforce, Metropolitan Police commissioner Cressida Dick said there had been a “high level of compliance” so far.

Speaking at a press briefing on Wednesday, she said the VE Day bank holiday weekend had been “very challenging” for officers as people headed to parks to enjoy the warm weather.

“As the easing comes, the restrictions are more complicated so it will be harder for people to understand what they can and can’t do,” Dame Cressida added. “Officers will find it challenging on occasion to enforce that.”

She said police had never been able to enforce social distancing with arrests and fines, but that they could “advise” people.

Dame Cressida said that while officers in London had “hundreds of thousands, probably millions of interactions” with the public during the lockdown, only 900 fines had been handed out.

In England, fines for breaching the law have been raised from £60 to £100 and will be increased to a maximum of £3,200 for repeat offences.

The College of Policing guidance said officers must use their discretion and encourage people to voluntarily comply with the law before issuing fines.

It added: “Remember, enforcement is a last resort.”

The guidance made clear that people cannot legally go on holiday within the UK, go to second homes, visit the homes of friends or family apart from for specified purposes such as helping vulnerable people.

The governments in Scotland, Wales and Northern Ireland have not relaxed restrictions to the same extent, or raised fines.

The police guidance warned that “travelling to outdoor spaces in Wales and Scotland for recreation may result in offences being committed in those jurisdictions, and so may not be a reasonable excuse for leaving home”.

It added: “When dealing with towns and villages bordering England and Wales, it is important that people respect the rules where they are, as intended activities may be prohibited, due to differences in legislation.”

In Wales, two-metre social distancing is enforceable by law and exercise must be carried out close to home.

Police in England and Wales have so far issued more than 9,000 fines under the Health Protection Regulations.

Members of the public must risk prosecution in order to challenge a penalty if they believe it has been issued wrongly by not paying it and going to court.

Officers were instructed to use fines and arrests as a “last resort” after encouraging people to comply voluntarily, but there have been several incidents of police overstepping their powers.

Following the prime minister’s announcement on Sunday, police accused the government of making it “almost impossible” to enforce restrictions with mixed messages over easing the lockdown.

A report released by parliament’s Joint Committee on Human Rights last month said people were being punished “without any legal basis” and the Home Affairs Committee voiced “concern that police were enforcing government advice rather than the letter of the law”.

The Liberty human rights group said the updated regulations had not received proper parliamentary scrutiny and were initially “rushed through”.

Advocacy director Clare Collier said the speed of implementation “resulted in heavy-handed policing at a time of severe anxiety for all of us”.

“Instead of narrowing those sweeping powers, the government is ramping up fines for falling foul of the lockdown,“ she added. “Doing so while its own unclear communications cause confusion over what is and isn’t allowed is a recipe for injustice.”

She added: “The powers must be rolled back, and far greater clarity provided to enable all of us to understand what we can and can’t do.”