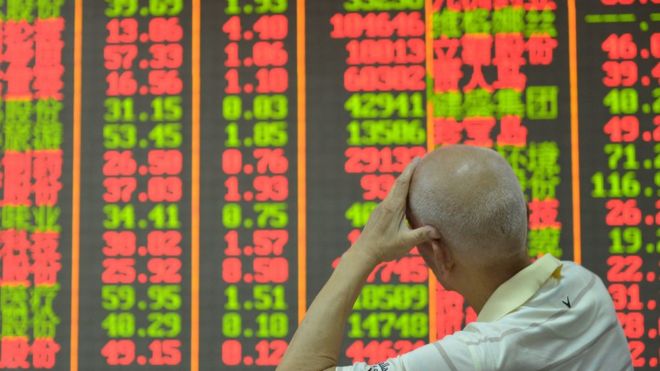 Chinese shares jumped higher on the first day of trade after a “circuit breaker” mechanism introduced to prevent sharp falls was lifted.

Regulators have stepped in after big losses in the mainland markets led trade to be suspended early for the first time on two occasions this week.
The central bank also set the yuan guidance rate higher to calm markets.
The sell-off came as weakening of the yuan led to worries that China’s economy was slowing more than expected.
The rest of Asia also recovered some losses after the dramatic plunge in Chinese shares had triggered a global sell-off.
Markets in Europe and the US made steep losses overnight after trading in the world’s second largest economy was closed within the first 30 minutes in the previous session, making it China’s shortest trading day on record.

On Friday, the Shanghai Composite was up 2.2% to 3,194.08 as investor confidence grew on the new measures introduced by authorities to support the stock market.
Regulators suspended the “circuit breaker” rule late on Thursday. Analysts said it was creating more panic selling instead of calming sentiment.
“[The fall in markets] looks to have been exaggerated and driven more by fears and regulatory issues around the share market and currency rather than a renewed deterioration in economic indicators,” said Shane Oliver, investment strategist at AMP Capital.
The People’s Bank of China (PBOC) set the daily yuan rate at 6.5646 – firmer than the previous day’s rate, ending eight days of weakening the currency to boost exports.
Investors were worried that China’s moves to weaken the yuan would spark a currency war in the region as other countries tried to remain competitive.
Read more: http://www.bbc.co.uk/news/business-35259344