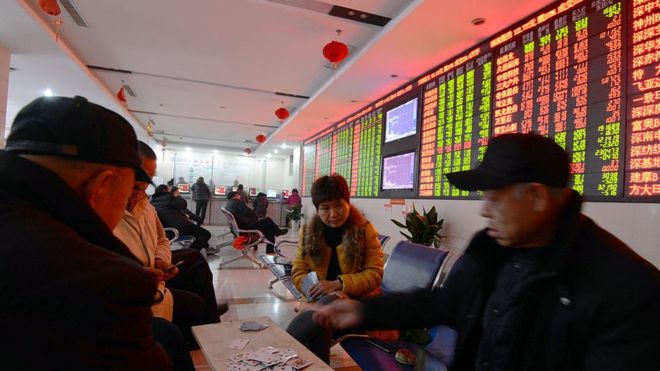 The Shanghai Composite fell 0.3% to close at 3,287.71 points, although it had opened more than 3% lower.
Hong Kong’s Hang Seng index also fluctuated through the day, and ended 0.7% lower at 21,188.72.
Trading in Shanghai was suspended early on Monday under a new rule designed to limit dramatic falls in markets.
But regulators said on Tuesday they may restrict stock sales to stem falls.
The China Securities Regulatory Commission said it would consider restricting the proportion of shares that major shareholders could sell during a given period of time.
The central bank also injected an unexpected 130bn yuan (£13.55bn; $19.94bn) into the market to keep borrowing costs down – in a move to reassure retail investors.
The measures, however, did little to prevent Chinese shares from falling in afternoon trade.

Analysts said investors were waiting to see if Beijing could stem the latest selling in Chinese stocks and whether more measures would be introduced.
But Bernard Aw, market strategist at trading firm IG, said Beijing was arguably more concerned about economic growth than the stock market.
“Furthermore, it could look really bad if they have to throw in more measures when they are in the process of withdrawing the [last] rescue measures,” he said in a note.
The new “circuit breaker” rule that suspended trading nationwide for the first time on Monday was created after sharp falls last summer and was meant to curb market volatility in China.
Monday’s 7% fall in China spooked global markets.
Overnight, US benchmark indexes lost up to 2% as concerns grew that the dive in the Chinese stocks was the start of another volatile period after last summer’s dramatic market rout.

Escalating tensions in the Middle East, which affected oil prices, also dented investors’ confidence.
Oil prices were flat after rising as much as 4% on Monday following the dispute between Saudi Arabia and Iran.
Japan’s Nikkei 225 index ended 0.4% lower at 18,374.00, while Australia’s S&P/ASX 200 closed down 1.6% at 5,184.43.
Only South Korean shares bucked the downward trend after a senior finance ministry official said the government would take action to stabilise the market if needed, following Monday’s steep plunge.
The Kospi finished up 0.6% at 1,930.53.
Source: http://www.bbc.co.uk/news/business-35229487