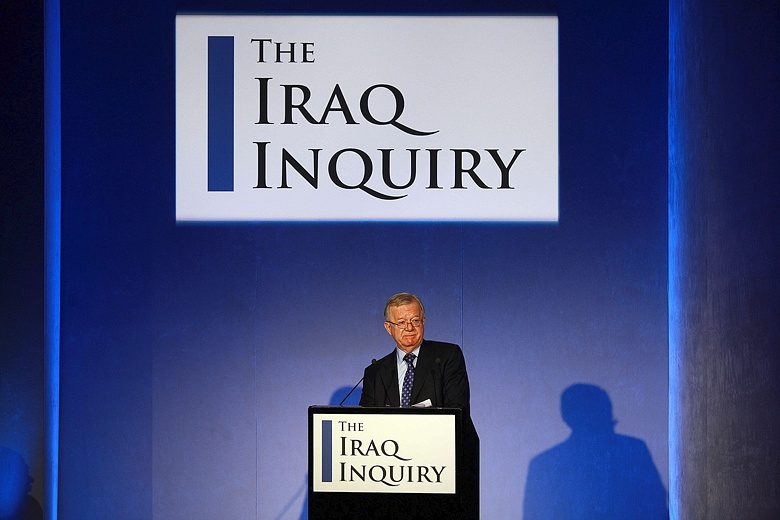 Tony Blair exaggerated the threat posed by Saddam Hussein, led Britain into war before peaceful options had been exhausted and sent ill-equipped British troops into battle, a damning report into the controversial Iraq War has said.
Sir John Chilcot’s seven-year long inquiry is scathing in its assessment of the former prime minister.
Sir John said the 2003 war – which cost the lives of 179 British soldiers and hundreds of thousands of Iraqis – “went badly wrong, with consequences to this day”.
Iraqi dictator Saddam Hussein was not an imminent threat and military action was not the “last resort”, he said.

His report accuses Blair of presenting “flawed intelligence” as fact to Parliament and the British public in the so-called “dodgy dossier” in the run-up to the invasion.
He also said the legal basis for military action was “far from satisfactory”.
In another damning criticism of Blair, it was revealed that in June 2002 – nine months before the invasion – he told US President George W Bush that he was “with him whatever”.
Blair said he took full responsibility for the war as he expressed “more sorrow, regret and apology than you may ever know”.
But he insisted British soldiers did not die “in vain” and told ITV News: “If I was back in the same place – I’d take the same decision.”
Families of fallen British soldiers are now exploring whether they can take legal action against Blair, with one relative branding him the “world’s worst terrorist”.

[youtube https://www.youtube.com/watch?v=7BIlQzvx3SY]
Tony Blair expressed “sorrow and regret and apology” but mounted a robust defence of the war in his response to Chilcot’s findings.
Blair told ITV News’ Robert Peston that he would take the same decision – which he described as his “most agonising” as prime minister – again.
In a lengthy press conference, Blair insisted the world was a “better and safer place” as a result and his decision to remove Saddam did not cause the unrest seen in the Middle East today.
Amid accusations he misled Parliament and the public, Blair responded: “I did not mislead this country”

British troops were ill-equipped for the conflict, the report found.
The Ministry of Defence was rushed into the conflict and was not prepared for evolving security threats, it said.
The MoD’s “slow response” to the threat from Improvised Explosive Devices, which killed so many of the 179 Britons, was highlighted.
It said there were unacceptable “delays in providing adequate medium weight patrol vehicles should not have been tolerated”.
The UK’s defence resources were severely overstretched by military campaigns in Iraq and Afghanistan, it said. “Decisions on resources for Iraq were affected by the demands of the operation in Afghanistan.”
Britain was so poorly prepared for the war that it had to strike deals with enemy militia groups who had killed British soldiers – a decision Sir John Chilcot described as “humiliating”.
Blair was accused of ignoring “explicit” warnings about the risks of the war and the impact it would have on the wider region as well as the security risk to Britain.
Sir John said the consequences of invading were “underestimated”, branding the planning and preparation for a post-Saddam Iraq as “wholly inadequate”.
His report dismisses Blair’s claim that difficulties after the invasion could not have been known in advance, saying top-level ministers were well aware of the inadequacy of the American’s plans to rebuild the country.
“The government’s preparations failed to take account of the magnitude of the task of stabilising, administering and reconstructing Iraq and of the responsibilities which were likely to fall to the UK.”
Memos, released alongside the report, also shed fresh light on exchanges between Blair and Bush in the run-up to the war.
They revealed that the pair were discussing regime change in Iraq as early as 2001, but Blair had urged Bush not to take rash action in the wake of 9/11.
But by the time Blair met Bush in Crawford, Texas in early 2002, the UK’s thinking had undergone a “profound change”.
The Joint Intelligence Committee said Saddam Hussein could not be removed from power without an invasion” and the government described Iraq as a threat that “had to be dealt with”.
A note in July 2002 – nine months before the invasion – showed Blair telling the president thatthe UK would be with him “whatever”.
Sir John accused Blair of “overestimated his ability to influence US decisions on Iraq”.
Sir John Chilcot said his report did not make a judgement on the legality of the conflict.
But he pointedly added: “The circumstances in which it was decided that there was a legal basis for UK military action were far from satisfactory.” 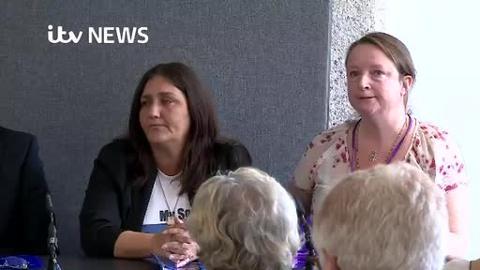 Play video
The tearful families of the British soldiers who died said their loved ones had died “unnecessarily” as they attacked Blair for launching the military action.
“There is one terrorist in this world that the world needs to be aware of, and his name is Tony Blair – the world’s worst terrorist,” the sister of Sergeant Bob O’Connor told reporters.
Reg Keys, whose son, Lance Corporal Thomas Keys, was 20 years old when he was killed in Iraq in 2003, said his son had “died in vain”.
Ronnie Barker, the mother of 23-year-old Private Lee Ellis who died in 2006, said she “would like to see Tony Blair in court”.
The families’ lawyer, Matthew Jury, said legal action against Blair was “possible” but refused to go into details when pressed further.
Prime Minister David Cameron – who voted for war in 2003 – told MPs that lessons had to be learned and “acted on”.
He said sending troops into battle without the right equipment was “unacceptable”.
“Whatever else we learn from this conflict, we must all pledge that this will never happen again,” he said.
Labour leader Jeremy Corbyn, a fierce critic of Blair and the Iraq War, said the invasion had been judged illegal by international authorities.
But Corbyn, who was heckled during his speech, stopped short of calling for his predecessor to be tried for war crimes as some had expected.
Alastair Campbell, Blair’s former communications chief, told ITV News that his former boss was just following the intelligence he was given.
Former cabinet minister Jack Straw, who was foreign secretary at the time of the invasion, said the consequences of the decision to take military action will “live with me for the rest of my life”.
Liberal Democrat leader Tim Farron said the inquiry’s findings vindicated his predecessor Charles Kennedy’s decision not to back the war. He said the war’s legacy threatened the safety “of all of us”.
source:  http://www.itv.com/news/2016-07-06/chilcot-report-iraq-inquiry-concludes-war-with-iraq-was-not-last-resort/