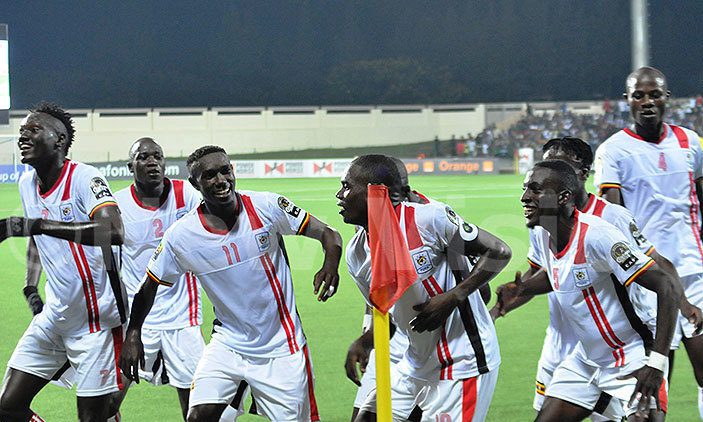 #WeGotYourBack #WeGotItCovered #WorldNews #NewVision #Sports #Football #Uganda #UgandanCranes #BiennialFootballTournament #CAF #CHAN
This money is given to each team that finishes third in the group stages of the biennial football tournament organized by CAF.
CHAN 2016: Cranes’ Group D results
Uganda 2 Mali 2
Uganda 0 Zambia 1
Uganda 1 Zimbabwe 1
Despite being eliminated in the ongoing Africa Nations Championship (CHAN) in Rwanda, Uganda Cranes will be assured of walking away with $125,000(sh435m).
This money is given to each team that finishes third in the group stages.
The Cranes played to one-all draw with Zimbabwe on Wednesday to finish third in Group D with two points, following another draw in their opening game with Mali.
Veteran striker Geoffrey Sserunkuuma, who came on as a substitute in the second half, scored the only goal for Uganda in added time after William Manondo had given Zimbabwe a 49th-minute lead.
This was Cranes’ third consecutive time they were participating in the biennial football tournament organized by the Confederation of African Football (CAF) exclusively featuring players from domestic leagues.
On all three occasions, Cranes have failed to progress beyond the group stages. The winner of the tournament on February 7 will receive $750,000 (sh2.6b) while the runners-up will settle for $400,000(sh1.39b).
Losing semi-finalists and quarterfinalists will each take home $250,000 (sh870m) and $175,000 (sh609m) respectively. The last team in each of the four groups will earn $100,000(sh348m).
The Uganda v Zimbabwe result meant that Zambia and Mali, who played to a goalless draw in the other Group D game, proceeded to the quarter-finals with seven and five points respectively.
Cranes will now shift focus to the 2017 Nations Cup qualifying double-header against Burkina Faso in March.
Read more: http://www.newvision.co.ug/new_vision/news/1415831/chan-uganda-cranes-bag-sh435m#sthash.aaQwMtgH.dpuf