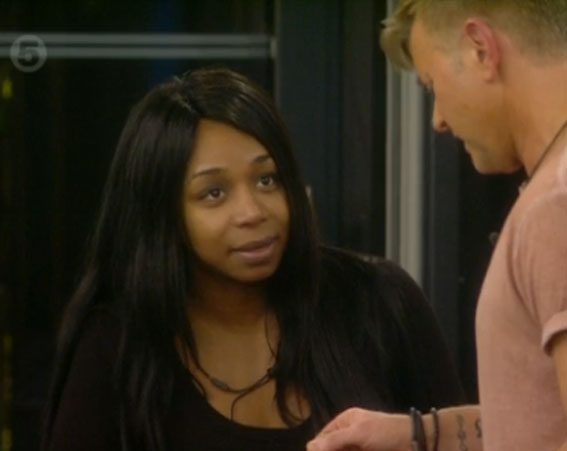 TIFFANY Pollard had quite the admission for Darren Day in the Celebrity Big Brotherhouse.
The US reality TV star recently admitted to other housemates that she thought the entertainer was good looking after he dressed up in a suit.
Tonight’s episode saw Tiffany confess to a shocked Darren that she thought he was “sexy”, and Darren couldn’t quite believe what he was hearing.
Asking him not to reveal her admission to anyone else, she explained: “I have something to admit to you, I don’t mean any harm.
“You’re such a nice man, you’re such a force in here you know. I would never want you to mention this to anyone else, but you’re so sexy.”
The housemate continued: “I tried to deny it, but you’re just so masculine. And your looks and the way you just speak, everything about you.”
Darren was visibly surprised by his pal’s harmless admission, asking: “Is this a task?”
But Tiffany revealed she was speaking the truth, adding: “I’d be lying if I said I didn’t think of you in those ways.”
Unfortunately for Tiffany, Darren is very much off the market, and he told her: “I’m very flattered, but you know I’m happily married and there’s only one woman for me and that’s my wife.”
Tiffany and Darren could be voted out of the house if they don’t win an immunity challenge, with all housemates asides Stephanie Davis and Gemma Collins up for eviction.
Source: http://www.ok.co.uk/tv/celebrity-big-brother-2016-tiffany-pollard-admits-darren-day-sexy-attracted-flattered?&utm_source=currently&utm_medium=browser-extension&utm_campaign=chrome